More than half of online shoppers experienced a delivery disaster or had at least one delivery that did not go as planned last Christmas, new research from Which? has found.

In a survey of more than 2,000 members of the public, Which? found the majority (54%) of people had a delivery not go as planned – ranging from parcels left in the rain and dishonest notes from delivery workers, to a customer who found her package in the toilet after a courier pushed it through the bathroom window.

Nearly one in five (17%) people told Which? at least one of their deliveries failed to arrive on time, which can be especially frustrating during the festive season.

One student said their delivery turned up hours late, forcing them to postpone leaving university for the Christmas break.

It was more common for deliveries not to turn up at all. Which? found a quarter (24%) of those who shopped online over the Christmas period ordered a parcel that failed to arrive.

A quarter (24%) said the courier did not follow instructions which meant their deliveries were handed to unauthorised neighbours or left in unexpected places.

One shopper said their delivery had been left with an unauthorised neighbour who went on holiday shortly after, so had to wait two-weeks to retrieve their order.

Which? also heard about deliveries being left in unauthorised places. For example, one person told the consumer champion the “courier put the parcel through the window to the downstairs bathroom and it literally ended up in the toilet”, while another complained their parcels were constantly left at the back of the house where they got “wet and damaged”.

Other issues shoppers experienced included dishonest couriers who left notes claiming the recipient wasn’t at home when they were (9%).

One person said they received a note claiming no one was at home, but they had seen the courier passing their home and not even attempt a delivery.

Three in 10 (29%) said their delivery arrived earlier than expected. While this might not sound like a problem, it frustrated some shoppers as it meant they were not home when it arrived.

One respondent said their delivery was left in the rain for 48 hours when it arrived earlier than expected while they were away for the weekend.

Retailers have a responsibility to ensure online orders are delivered to customers, however just a third (31%) of those who had an issue with their delivery complained to their retailer.

If a delivery arrives damaged or faulty, customers are entitled to a replacement, repair or refund. Customers can also get a refund from their retailer if they paid extra for a special delivery that then arrived late.

“Online shopping can take the hassle out of Christmas shopping but dealing with late, missing or damaged deliveries can be a nightmare for shoppers.

“Under the Consumer Rights Act, online retailers have a duty to ensure online orders are delivered within a reasonable time and in good condition, so if your delivery hasn’t gone to plan, don’t suffer in silence and speak to your retailer to resolve the issue.

“But be aware if you give permission for your delivery to be left in a specified safe place or received by a nominated neighbour and something goes wrong, you will still be considered to have received the delivery. Think very carefully about those options when you’re making a purchase” 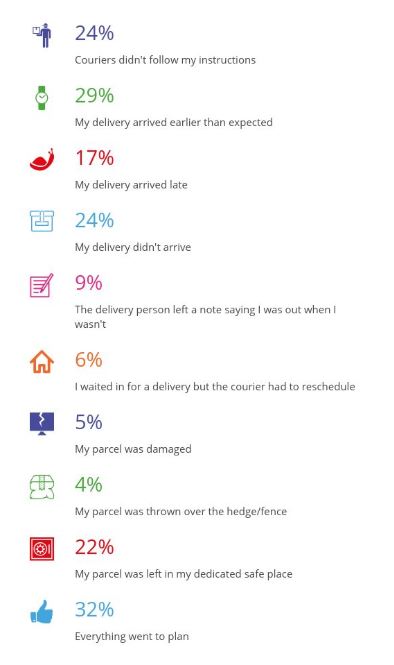