Outfox the Market has knocked Octopus Energy off the top spot in Which?’s annual energy satisfaction survey, while the traditional industry giants languish at the bottom of the rankings yet again.

In a year when millions of people have been living under lockdown and racking up substantial gas and electricity bills, finding a good-value energy supplier that offers excellent customer service has never been more important.

The consumer champion surveyed more than 8,000 people in September 2020 about their experiences with their energy provider across a range of categories including bill accuracy, customer service, complaints handling and value for money.

Outfox the Market, which was founded in 2017, finished at the top of the table, rising from 19th position last year.

The small energy provider frequently offers some of the cheapest deals on the market and received an impressive customer score of 82 per cent, with five-star ratings for billing accuracy and value for money.

It had the highest proportion of customers (93%) that experienced no issues in the last 12 months, but was not named a Which? Recommended Provider as it did not provide enough information on its procedures and was ordered to make its payment into Ofgem’s feed-in tariff scheme.

Following two years at the top, Octopus Energy was second in this year’s satisfaction survey but still achieved an impressive 80 per cent customer score. It is now one of the UK’s largest energy providers, supplying 1.5 million homes, however this rapid growth has not stopped it from keeping customers happy.

Octopus Energy achieved a five-star rating for bill accuracy and four stars for bill clarity, customer service, complaints handling and value for money. For the fourth year in a row, Octopus Energy was also named a Which? Recommended Provider (WRP), along with digital-only challenger Pure Planet for the second year in a row.

Along with excellent customer scores, energy firms must meet additional criteria including no regulatory intervention, with good procedures and performance when it comes to complaints and customer waiting times, to be named a WRP.

Avro Energy rounds off the top three firms, with a respectable 76 per cent customer score. The challenger firm finished in 16th place last year but has made improvements and almost nine in 10 (89%) of its customers said they’ve had no issues in the past 12 months. It received a five-star rating for bill accuracy and four-stars for all other categories including customer service and value for money.

Also among the top energy companies were People’s Energy, Pure Planet, So Energy and Utility Warehouse – and all four impressed customers when it came to billing accuracy and clarity.

The rise of challenger energy companies and major acquisitions has meant the end of the traditional “Big Six” energy companies, but the former giants, excluding SSE (owned by Ovo), still account for more than half of the energy market and continue to score below average in Which?’s satisfaction survey.

Npower was the lowest-ranked energy provider with a customer score of just 54 per cent. While it received three stars for bill accuracy and customer service, customer feedback meant it got two stars for bill clarity and complaints handling and a dismal one-star rating for value for money.

Scottish Power finished second from bottom with a customer score of 55 per cent. It also received a one-star rating for value for money, and just two stars for bill clarity, customer service and complaints handling.

Eon finished third from the bottom, tied with SSE, receiving a customer score of 60 per cent. While it received four stars for bill accuracy and three-stars for customer service, it managed just two stars for value for money.

SSE, which is owned by Ovo, received three stars across most categories but also performed badly when it came to value for money and achieved just one star in this category.

“There are impressive energy companies, from small firms such as Outfox the Market to rapidly expanding companies like Octopus Energy, so customers do not have to put up with substandard service from any provider.

“Anyone unhappy with their provider should do their research and consider switching to one that can offer a better experience overall – you could save more than £150 a year.”

Which? surveyed 8,086 UK adults in September 2020. Fieldwork was carried out online by Dynata and data have been weighted to be representative of the UK population (aged 18+). Customer score is based on satisfaction and likelihood to recommend. Customers also rated aspects of service, which are presented as star ratings. Yorkshire Energy scored 79% in our survey but has since stopped trading, so its results aren’t included above.

Which? rated 25 energy companies in Great Britain, covering more than 95% of that market, as well as six companies in Northern Ireland.

Which? calculates that a medium user (using 12,000kWh gas and 2,900kWh electricity per year) on a dual-fuel default tariff at the level of the current price cap could save up to £157 by switching to the cheapest deal from a high ranking provider. Based on widely-available tariffs available across England, Scotland and Wales, paying by monthly direct debit, with paperless bills. Data is from Energylinx and correct on 4 January 2021.

Please see below the full table of results: 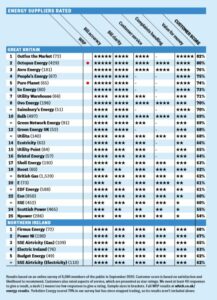