Services such as cafés, markets, and tattoo parlours have thrived even as major retailers struggle amid concerns for the future of the UK high street, new analysis from Which? reveals.

The consumer champion analysed almost 1.5 million Ordnance Survey (OS) business records to compare Britain’s retail and services landscape from 2014 to 2019 – and found many high streets moving away from being carbon copies of one another.

Instead, a model more familiar to older generations is re-emerging in some areas – with flourishing personal services, markets, and food specialists that focus on ‘experiences’ replacing retailers hit directly by the rise of online shopping.

The analysis found businesses offering personal services that cannot be replicated easily online – such as hair and beauty services, tattoo and piercing shops, and funeral directors – have boomed.

Of the 10 sectors that have seen an increase in premises on UK high streets, six are categorised as ‘eating out and services’, with the biggest increase since 2014 seen in banqueting and function rooms (114%).

This was followed by markets, one of the few sectors categorised as a retailer in the top 10, which saw an increase of 52 per cent between 2014 and 2019.

Tattooing and piercing services increased their presence on the high street by 44 per cent; cafés, snack bars and tea rooms by 35 per cent; and hair and beauty services by 31 per cent.

The most negatively impacted sector was book and map sellers – the first to be hit by the rise of Amazon – which saw a reduction of 70 per cent over the five-year period.

Glasgow City saw the biggest growth in outlets categorised as ‘personal services’ in the five year period, with a 61 per cent increase in premises of this kind.

Coastal towns Eastbourne and Hastings both saw considerable decreases in the number of retail outlets on their high streets (down 18 per cent and 15 per cent respectively), however both also saw significant increases in the presence of ‘personal service’ businesses (both up by 41 per cent), illustrating the shift in demand for services over retail outlets.

While Torbay and Islington saw the biggest decreases in retail outlets over the same period, with both dropping by 20 per cent, both also saw the number of personal services on their high streets increase by a quarter (24% and 25%, respectively).

Despite ongoing concerns regarding the ‘death of the high street’, businesses offering services or experiences that cannot be replicated online have prospered in the face of the booming digital economy.

These traders can also function as effective drivers of footfall to other businesses, with many traditional retailers now pivoting towards offering these kinds of services in-store.

A number of department stores and fashion chains, such as Topshop, have started offering hair and beauty services or coffee shops, and some even offering tattoo and piercing services within their stores, in an effort to keep pace with the changing high street landscape.

Some computing, phone and electronic shops have also jumped on this trend, with many increasingly becoming destinations for repairs or advice rather than places to purchase goods.

The analysis suggests that in order to thrive in the face of the growing digital economy, UK high streets need to become wise to the unique role they can play in consumers’ lives, offering services that cannot be replicated online to act as an anchor for bringing people into town centres.

“While it’s concerning to have seen so many well-loved brands disappear from UK high streets in recent years, our research suggests the future of our town centres isn’t necessarily as bleak as the reports of store closures would have you believe.

“As shoppers needs and habits evolve, it’s vital that businesses keep up with these changing trends and consider how they can grow with them, in order to continue thriving on the high street.” 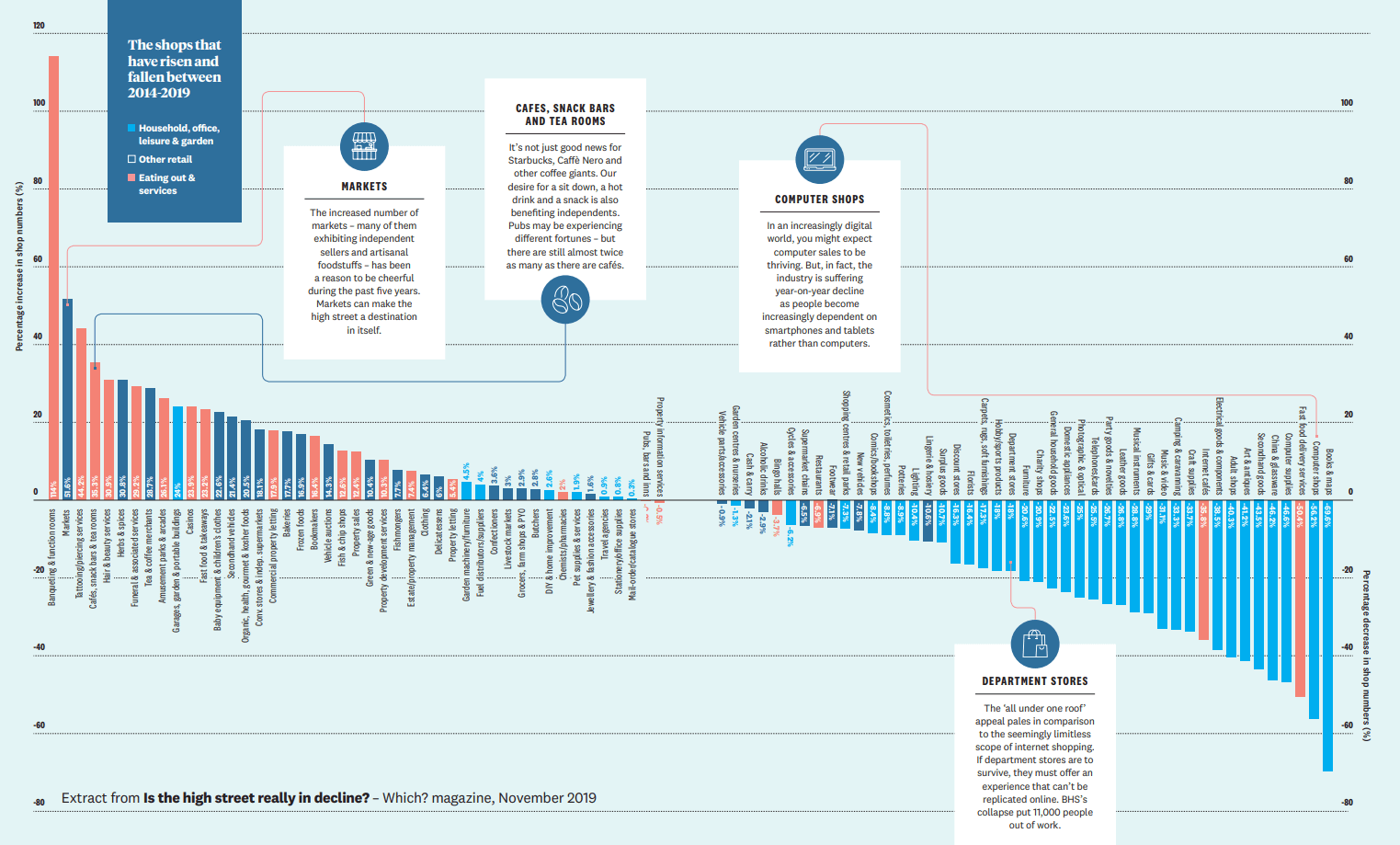