Small energy suppliers have trounced the Big Six in Which?’s annual satisfaction survey, with Britain’s largest providers left languishing near the bottom of the rankings.

The consumer champion surveyed 8,000 people across the UK about their provider – and the results demonstrate the importance of performing well in areas valued by customers, including value for money, excellent customer service and accurate billing.

Several small firms that were falling short in some of these crucial areas have collapsed in recent months – while those that kept their customers happy dominate the top of the rankings.

Octopus, which supplies more than 400,000 homes, was rated as good or excellent value for money by nine in 10 customers and 96 per cent of its customers gave it the same rating for online customer service.

However, small supplier, Solarplicity, rated for the first time in the Which? survey, was the worst energy firm according to its customers, with an overall customer score of just 44 per cent (compared with Octopus’ 80 per cent).

It was the only provider to receive one-star ratings, including for customer service, both online and on the phone. Additionally, three quarters of its customers told us that it is poor or very poor at dealing with complaints.

The Big Six energy suppliers – British Gas, EDF Energy, Eon, Npower, Scottish Power and SSE all sit in the bottom third of the table, with none of the six receiving an overall customer score higher than 58 per cent, 22 percentage points lower than Octopus.

Which? found less than one in five (18%) Big Six customers are very satisfied with their supplier, compared with a third (33%) of customers with medium and small suppliers.

“Our survey shows the importance of value for money and good customer service – energy suppliers delivering both to their customers tend to be thriving, while the Big Six and other poorly-ranked firms are paying the price for not giving customers what they want.

“All energy companies should be working to give their customers competitive prices and excellent customer service. If you’re not getting a good deal, you should look to switch, as you could potentially save over a hundred pounds and get a much improved service.” 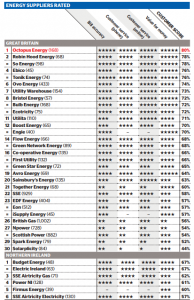