A new survey by Which? University highlights some of the most common course-related costs university students have to deal with in addition to tuition fees.

Additional and sometimes unexpected costs such as these can put real financial strain on students. In another Which? survey conducted this year, 40 per cent of students said the cost of living at university was higher than expected with almost half (46%) of students admitting to relying on top ups from their parents to bridge the gap.

For this latest survey, Which? University asked students for their approximate spend in the previous term on a number of common course costs – including textbooks, field trips and travel to and from work placements.

In addition to books and technical materials, the highest single cost was found to be on computers, with a third (32%) of those surveyed having spent money on a computer in the previous term, with their average spend at £484.

Which? also asked students to detail some of the more unusual costs they had to deal with for their particular subject. Clothing was one of these, with steel capped wellington boots, costumes for shows, scrubs and dancewear being mentioned by some respondents. Which? also heard from science students who had to meet the costs for dissection kits, and from music students who had to pay for concert tickets.

Tupperware to hold insects for taking photos was perhaps the most niche additional item that was mentioned in response to the survey.

With the start of the new academic year rapidly approaching, Which? University’s Student Calculator is a helpful tool to help current and prospective students get an idea of living costs at different UK universities so they can budget effectively.

Using the tool, students can calculate their average monthly expenditure, including a breakdown of rent, transport costs and utility bills.

“The financial focus for many students may be tuition fees but what this survey shows is how many potential additional costs there can be on top of this, which can really add up over the duration of a university course.

“We want to help take some of the pressure off by providing students and their parents with an indication of the living costs at their chosen university so they can plan accordingly and make the right financial choices.” 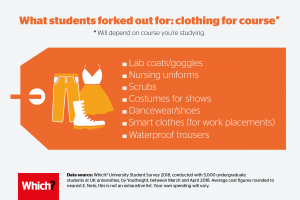