Consumers could save £336 a year – more than £3,000 over a decade – on their energy bills and help reduce their carbon footprint just by switching to more energy efficient appliances when their old white goods need replacing, Which? research finds.

The consumer champion’s newly-launched running cost tools aim to help people save money on their bills by calculating the energy efficiency of tumble dryer, washing machine, fridge freezer, oven and dishwasher models Which? has tested against the energy price cap.

The least efficient models in each category would collectively cost an eye-watering £490 a year to run. Consumers could save £336 annually by opting for the most energy-efficient appliances – which cost just £154 a year to run.

Which? energy cost data comes from independent lab testing and is based on real-world scenarios. It often reveals big differences between A-rated machines, and that in some cases B and C-rated machines can actually cost less to run.

While some of the most efficient appliances may be more expensive up front, Which?’s research has found they are cheaper over the average product’s lifetime due to their lower running costs.

For example, the most energy-hungry vented tumble dryer the consumer champion tested, the Hoover HL V10LG-80, costs £260 to buy while the most energy-efficient, the Miele TCB140 WP, costs £800.

However, the Miele tumble dryer costs just £29 a year to run – if drying roughly three loads a week – compared to £135 for the Hoover model. Factoring in the cost of both tumble dryers, consumers would save £1,580 over the course of the appliances’ lifetimes if they opted for the Miele machine due to its lower running costs.

Heat pump tumble dryers tend to be both more energy efficient and pricier than cheaper condenser and vented models but can easily pay for themselves in energy savings. On average, condenser dryers cost £109 per year to run whilst heat pump models cost just £42.

Consumers also stand to make big savings by choosing carefully when they buy their next fridge freezer. The least energy-efficient fridge freezer tested, the Hotpoint FFU3DX1, costs £134 in energy bills a year. People could cut this cost by £104 by using the LG GBB92MCBAP, which runs up just £30 in annual energy bills.

Consumers could also save £55 a year by choosing a more energy efficient washing machine when they need to replace their existing model. On average, a washing machine will add £46 per year to people’s bills, but running costs can vary from under £20 to as much as £70 per year if running four 40°C washes per week.

The most efficient washing machine model tested was the Ebac AWM74D2H, which costs just £15 a year to run, while the least efficient model, the Haier HW100-B14876 costs £70 annually.

However, washing machines which use more energy tend to wash better. Which?’s Eco Buy reviews highlight the products which are long lasting, energy and water efficient and easily repairable while still doing their job well. People should check Eco Buy reviews before purchasing new appliances to make sure the appliance they choose is also high performing.

Ovens are not typically as energy-hungry as other large appliances such as fridge freezers or tumble dryers, but it is still worth checking out their energy-efficiency before buying.  On average a built-in oven costs £53 a year to run.

The least efficient built-in oven the consumer champion tested was the Smeg Dolce Stil Novo SFP6604WTPNR – costing £73 to run a year if used for about five hours per week at 170°C. Consumers could save £39 a year by opting for the most efficient oven tested, the Beko BXIF35300X – with just £34 of annual running costs.

The least efficient dishwasher Which? tested, the Candy CYF 6F52LNW-80, would add £78 to people’s annual energy bill if running five washes per week. However, the most efficient full size, the Bosch SMV68ND00G, costs just £46 to run a year – resulting in an annual saving of £32. On average a full-size dishwasher costs £63 a year to run.

Which? is advising consumers who are looking to cut their energy bills to use its running cost tools to check the efficiency of appliances before purchasing new white goods.

While many white goods already come with an energy efficiency rating, Which?’s surveys have found that UK consumers use appliances differently from the official rating tests. For example, the ratings for washing machines are mostly based on washing at 60°C, but most people wash at 40°C.

The consumer champion’s running cost tools calculate the energy efficiency of appliances based on how consumers have told Which? they use their white goods. However, as the tool only looks at the energy efficiency of appliances, people should also check Which?’s Eco Buy reviews to ensure the appliance they choose is high performance and offers the best possible value for money.

“Choosing the right appliances for your home could cut hundreds of pounds a year from your energy bills and reduce your environmental impact.

“This is crucial at a time when most of us are already facing higher energy bills and having to tighten the purse strings. 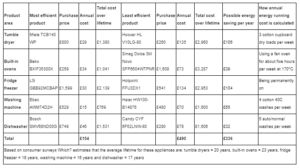 *Total cost over lifetime includes the purchase price and the running costs of the appliance over its lifetime. Purchase prices were the most up to date prices online at the time of issue.

Some models produced by the same brand in Which?’s running cost tools are listed as having the same annual running costs. These models are often the same product in another colour or with aesthetic changes so only one model is listed in the table above.

A spokesperson from Hoover commented: “Vented tumble dryers are less energy efficient than other types of dryers on the market. Our Heat pump models with A++ ratings for example are amongst the most energy efficient. Generally, Heat Pump models are more expensive than the entry level vented models due to the advanced technology used.

“As a business we are committed to reducing the energy consumption of all of our appliances and continue to invest in their development. Earlier this month we opened a brand-new, best-in-class tumble dryer factory in Turkey, which will provide additional capacity for the production of energy efficient Heat Pump models.”

A spokesperson from Candy said: “We’re currently making upgrades to our entire dishwasher range for 2022. This will build upon our current product collection, including the Candy CYF 6F52LNW-80, which is one of our entry level models.

“Significant investment has gone into R&D and production, and this includes plans for a new dishwasher factory which will open in 2022. The new production plant will utilise a completely new dishwasher platform and product re-engineering and energy efficiency will be a key part of the manufacturing process.”

Hotpoint said: According to Youreko, an independent energy consumption tool on the Hotpoint website, this appliance is not the least efficient on the market and has a £314-lifetime energy saving compared to the least efficient model in the UK. The tool rates the product out of all similar specifications in the UK, and you can see there is nothing cheaper to run at this price point, which is deemed good value for money.

Smeg said: Smeg ovens offer the consumer both flexibility, speed and efficiency. The Circulaire function used in the WHICH? test can achieve 180C in just 4-6minutes. Ideal for consumers who may well be time poor. However, all Smeg ovens, regardless of their model offer an Eco function. This uses the same heating system as the Circulaire function, fan-forced convection, but achieves the temperature at a much slower and efficient rate.  All ovens sold have to be tested and display an energy label, making it simple for customer to compare energy consumption and thus running costs.  The Smeg ovens are tested on the ECO fan-forced convection function. The Smeg oven tested by WHICH? uses a mere 0.68kwh compared to competitors that sit at 0.69kwh and up to 0.71kwh.  The Beko oven used to compare running costs in the article below uses 0.85kwh on the same test. Whilst the running costs mentioned in the article may be accurate for the Smeg Circulaire function, the programme selected to run this test is not ‘like for like’ or comparable and therefore could be misleading to customers.

Haier said: As a brand we aim to consistently improve and develop our products. The model that has been chosen by Which? to be tested at this time is being discontinued and is not currently listed on our website. We are however aware of its energy rating which is why we have since launched an improved and more efficient A rated range.