Families and holidaymakers travelling around the UK face a near-impossible trade-off between low fares and reducing their carbon footprint, according to a new snapshot investigation from Which?.

The consumer champion compared the cost of flying to taking the train on the same dates on 10 popular routes across the UK. The snapshot investigation found that in eight instances it was more expensive to take the train, costing 49 per cent more on average than flying, and one train route costing more than two and a half times the cost of flying.

However, the CO2 emissions caused by flying are, on average, six times those caused by taking the train, meaning travellers face a tough choice between cheaper, shorter flights and taking the more environmentally friendly route.

The biggest difference in price was found for a return journey from Birmingham to Newquay, with a flight costing £67 and a train journey on the same dates costing £180 – an increase of 169 per cent. The train route Which? looked at also involved making two changes and, including the return journey, would take more than 10 hours longer than flying in total.

However, flying this route would emit more than five times as much CO2, creating an average of 156kg of CO2 emissions per person. In comparison, taking the train would emit around 27kg of CO2 per person.

All of the carbon emissions on the flight routes the consumer champion checked were more than five times the amount created by taking the corresponding train route, with some flight routes emitting more than six times as much carbon.

However, the train journey would cost nearly twice as much as flying, with a flight costing just £87 while train tickets cost £172. The total journey, including both the outward trip and the return, would also take more than six hours longer by train than it would by plane.

The flight routes with the highest carbon emissions were Edinburgh to Bournemouth and Glasgow to Southampton, at 287kg of CO2 per person each. While taking a return trip by train from Edinburgh to Bournemouth would only emit 52kg of CO2 per person – around a fifth of the emissions created by flying – the journey would cost £70 more than flying and take 14 hours longer.

The difference in price between flying and taking the train from Glasgow to Southampton was only £28 though, and would save 238kg of CO2 per person.

In response to more people travelling across the UK for their holidays this year, airlines have launched dozens more domestic routes. With environmental concerns influencing how many people spend their money, it’s important people are armed with the facts to make informed choices about how they travel.

Which? is advising anyone who wants to reduce their carbon footprint while travelling across the UK to do their research to find the cheapest and fastest way to travel by train, through taking advantage of advance booking, railcards, and other money-saving tricks such as split-ticketing.

“As the pandemic continues to cause uncertainty for international travel, many of us are taking holidays closer to home this year. Travellers who choose to take the train face significantly higher fares and journey times, putting those who want to lessen their environmental impact at a disadvantage.

“There are steps that people can take to reduce the cost of travelling by train. Take the time to compare dates and times to see if cheaper fares are available, and look into what railcards you might be eligible for to save up to a third on train travel. You may be able to make further savings by checking if split-ticketing is an option on your chosen route.” 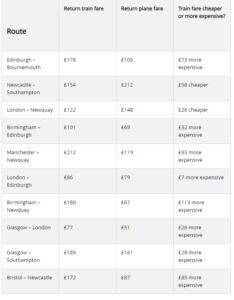