Boiler owners could be paying thousands of pounds over the odds for cover they don’t need, as new Which? research reveals nine in ten people would be better off paying as they go for repairs and services.

The consumer champion asked more than 7,000 of its members about their experiences of boiler repairs and services, and analysed costs to work out whether boiler cover or paying as you go is more cost effective.

According to Which?’s analysis, just six per cent of boiler owners would have benefited financially in the event of a repair if they had had boiler cover, with the overwhelming majority being better off paying when required for repairs and servicing.

Half (48%) of people surveyed needed to call out a boiler repair person in the past five years, with those without cover paying an average of £107 per repair.

With the average cost for an annual service being £80, the combined cost of paying when required was still £101 cheaper than the average annual boiler cover premium of £288.

Which? also estimated that even if customers were unlucky enough to need a typical boiler repair every year for 10 years, they would still be more than £2,000 better off than if they took out annual boiler cover.

More than a third of respondents reported that their boiler hadn’t broken down at all in the last five years, and if that was to continue for a further five years, owners could save as much as £3,000 over a decade.

Nearly one in five (16%) respondents in the survey said they had boiler cover. Two thirds of those told the consumer champion that it was for reassurance, as a catastrophic boiler failure could set customers back thousands.

The survey also found that almost a quarter of people who pay for boiler cover are still covered by the warranty. And if home emergency cover is included in a home insurance policy, either as standard or an optional extra, customers could be doubling up should they also have separate boiler cover.

Most home emergency policies include some boiler repairs – and sometimes even replacement, so it is worth consumers checking the terms of their policy.

Which? is advising boiler cover customers to consider whether they are getting value for money from their policy. If they decide to remain covered they should check the levels of cover, shop around for other providers willing to offer a lower quote, or haggle with their provider when renewing policies.

“Our analysis shows that boiler cover is rarely worth the money – with excessive premiums costing customers hundreds if not thousands of pounds more than if they paid for repairs and servicing themselves.

“If you have boiler cover for peace of mind, there are simple steps you can take to get a better deal. Don’t pay for cover you don’t need and check you’re not at risk of having to pay extra for unexpected exclusions like servicing.” 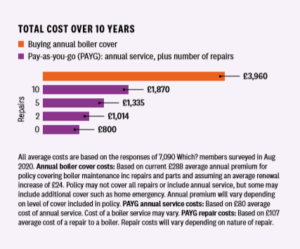