Passengers with reduced mobility are sometimes being left humiliated, deprived of their dignity and in some cases even physically hurt when travelling through airports, putting them off flying altogether, a new Which? investigation has found.

The consumer champion has heard from passengers who feel they have been robbed of their dignity and left in degrading situations by inconsistency in the assistance provided, accessibility staff not doing their jobs properly and poor communication between airlines, airports and service providers.

All UK airports must, by law, provide free support to any disabled passenger who needs it. The law also dictates that people with restricted mobility should have the same opportunities for air travel as anyone else.

But a survey conducted by the Research Institute for Disabled Consumers (RiDC) for Which? found that nearly half (46%) of passengers with reduced mobility felt unable to travel by air because of their disability in the past two years.

Even experienced travellers have been forced to rethink their travel aspirations because of traumatic and degrading airport experiences. In one particularly shocking case, Martyn Sibley, a keen traveller who uses a wheelchair, had his foot caught and bent back as he was being lifted into his plane seat, resulting in pulled tendons in his ankle.

Experiences like Mr Sibley’s are rare but problems are all too common for people with reduced mobility. The survey found that of respondents who had used special assistance at an airport, a quarter (25%) said that they were dissatisfied – meaning misery for thousands of passengers each year.

Which? Travel has received numerous other complaints about appalling experiences. In one instance, a 76-year-old with severe arthritis was left abandoned and despite booking ‘special assistance’ had to drag herself through Heathrow airport with no help at all. Recalling the experience she said she “felt drained and near collapse”.

While this incident occurred before the airport received a ‘good’ rating by the Civil Aviation Authority (CAA), the special assistance service at Heathrow was deemed the worst overall in the RiDC survey, with over a quarter of respondents (28%) saying they were dissatisfied.

Despite the CAA’s ranking, the regulator said that due to a dip in performance levels there was a chance London Heathrow will not meet the standard for a good rating next year.

The CAA’s report found that there are now no ‘poor’ airports for disabled access in the UK and just one – Manchester – that ‘needs improvement’. The RiDC survey respondents found Manchester to be the second-worst, with one in five (22%) feeling dissatisfied.

One passenger discovered that while there was a wheelchair waiting for him upon arrival at Manchester, no staff were available to push it.

His wife reluctantly did it herself, after being assured the route to the plane was flat, but lost control of the wheelchair on the slope of the air bridge and it crashed at the bottom, leaving him dazed and shocked.

Highlighting the multitude of pitfalls faced by passengers with reduced mobility, one told Which? about a ‘dehumanising’ experience when he was told his mobility scooter could not be removed from the plane when he arrived at his destination. He was told he would have to stay on the plane and fly back to the UK.

Although many people receive excellent assistance at UK airports, Which? regularly hears from passengers who have experienced distress or humiliation as a result of poor levels of assistance from airport or airline staff.

The consumer champion believes more needs to be done to ensure better communication between airline, airport and special assistance staff as well as extra training to make sure all passengers are cared for in a dignified manner.

“Not one single person should have to suffer the indignities and pain we heard about in the course of this investigation. But it seems these experiences of inadequate airport accessibility services are all too common, so it’s unsurprising that thousands of disabled travellers feel unable to fly.

“It’s also unacceptable. Airports have a legal responsibility to provide these services and more needs to be done to ensure no passenger is made to feel this way just because they wanted to take a holiday.” 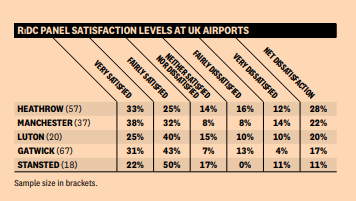 A Heathrow spokesperson said: “We apologise for the experience that (the passenger) had when travelling through our airport. Since 2016, we have invested over £23 million in new equipment, facilities and training to improve our assistance service and we will continue to work with our industry partners to push for more collaboration that results in a seamless service for all of our passengers.”

Manchester Airport apologised and told Which?: ‘OCS is no longer our special assistance provider, having been replaced by a new company, ABM, on 1 April. As part of this new deal, there has been significant investment in additional staff and new equipment, which is being reflected in an improved performance.’

Martyn is happy to talk to media about his experience, should you want to speak to him please contact the press office.