Deprived areas are losing free cash machines at a much faster rate than affluent ones across the UK – forcing thousands of people in poorer communities to pay up to £2 per withdrawal, new research from Which? reveals.

Which? analysis of data from Link – the UK’s biggest ATM network – shows one in 10 (9%) free cashpoints across the country closed or switched to fee-paying in a 17-month period after major changes to how the network is funded.

The consumer champion looked at Westminster constituencies and found poorer communities have been hardest hit by these changes, with those most reliant on cash and who can least afford to pay for withdrawals facing charges or being forced to travel long distances to access their own money for free.

Which? chief executive Anabel Hoult and Natalie Ceeney, chair of the independent Access to Cash Review have written to Chancellor Sajid Javid, calling on the government to take action to guarantee people’s ability to access and pay with cash, ensuring that millions of people who rely on it as a payment method are not left behind as digital payments grow in popularity.

While some communities in cities and towns can lose a few cashpoints and still have a reasonable level of access to free-to-use ATMs, people in less well-served areas that have seen a spike in the percentage of fee-paying machines are more likely to be left with no option but to pay to withdraw cash.

Residents of Great Yarmouth have been left with a cashpoint network in which half of machines (49%) now charge a fee, with locals facing fees of up to £2.00 per transaction.

Almost two in five (39%) of the network in Vauxhall and Blaenau Gwent (also 39%) now charges fees. This is followed by Birmingham Hodge Hill (34%) and Nottingham East (33%).

People in these areas now face fees of up to £1.99 per withdrawal, with the proportion of fee-paying machines well above the national average of 21 per cent.

Overall, Which? found that the most deprived areas across the UK saw a reduction of 979 free-to-use machines – equivalent to six per cent of their ATM network.

But the least deprived areas lost just 223 free cashpoints – equivalent to four per cent of their network of machines.

The consumer champion is concerned that measures put in place by Link and the banking industry to help those in deprived or isolated areas will not be effective enough and that the current proposals will not adequately safeguard free cash access in the long-term.

Which? believes the Payment Systems Regulator (PSR) must urgently take control of how cashpoints are funded to address the rapid reduction in free cash access across the UK.

Ultimately, however, it is likely that the government will need to introduce legislation giving the PSR a duty to ensure the many people still reliant on cash aren’t forced to pay just to access it through the double blow of bank branch and cashpoint closures and an alarming shift to fee-charging machines.

“We know that people in more deprived communities tend to rely heavily on cash, so it’s deeply concerning that those who can least afford it are being hit with the extra burden of hefty fees to access their own money as free cashpoints close at an alarming rate.

“The government and regulators must urgently get a grip on these rapid changes to the cash landscape and guarantee people across the UK can continue to access this important payment method for as long as it is required.”

Deprived areas are calculated by using the Indices of Multiple Deprivation (IMD). Every neighbourhood in the UK is assessed on a number of variables like employment, income, crime, healthcare and then ranked against each other. Which? combined the two lowest deciles to generate the field for ‘deprived areas.’

The impact of a reduction in free cash access is particularly felt in poor communities. Previous Which? research found that over three-quarters (78%) of consumers in the two lowest household income groups rely on cash the most – using cash at least two or three times a week.

And while cash use is in decline, there are still 1.9 million people in the UK reliant on it in their daily lives. 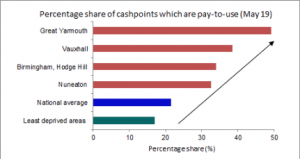 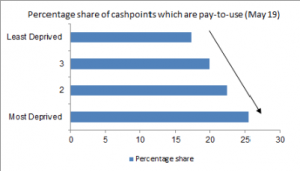