Consumer confidence in the economy hits its lowest point since the start of the pandemic, Which? research reveals, as the cost of living crisis and price rises continue to bite.

According to the latest findings from Which?’s consumer insight tracker, financial confidence is tumbling as fears of a recession continue to grow.

Just eight per cent of consumers said they thought the UK economy would improve over the next 12 months, whilst nearly eight in 10 (78%) thought it would worsen – giving a net confidence of -70 compared to -47 in May.

Confidence in future household finances also dropped to -40 in June compared to -28 in May. This -40 level of confidence matches the lowest point of the pandemic in March 2020.

Which?’s tracker also shows that financial difficulty has stayed at consistently high levels. Six in 10 (58%) consumers said their household has had to make an adjustment – such as cutting back on essentials or dipping into savings – to cover essential spending in the last month. This is similar to the 57 per cent observed in May and 59 per cent in April and a significant hike on the 40 per cent seen just a year ago.

Worryingly, an estimated 2.1 million households missed or defaulted on at least one mortgage, rent, loan, credit card or bill in the last month. This marks the sixth month this year that an estimated 2 million or more households have missed a payment.

Although those on lower incomes are most severely affected by the rising cost of living, Which?’s research shows that consumers across all ages, regions and income bands are feeling the effects.

One 35-year-old woman on a low income of under £21,000 said: “The prices of everything [are] rising so steeply but wages and benefits are not, my wages have gone up by about £10 a week yet my petrol has gone up by £40 a week. And the cost of a food shop feels extortionate! There’s no extra money coming in but the amount going out is increasing at an alarming rate.”

A 61-year-old man on a middle income of £28,000 – £34,000 said: “The value of personal savings [is] being eroded by inflation coupled with the value of stocks and shares ISAs falling due to global financial market falls.”

A 51-year-old woman on a high income of more than £69,000 said that “everything is increasing except our income.”

With winter fast-approaching – a time when budgets are stretched even further by increased energy usage, the government and businesses must act quickly to support the most financially vulnerable as prices keep rising.

The recent series of one-off payments announced by the government to help with the energy price cap increase in October will bring relief to many but their success will be judged on whether they continue to reach the most financially vulnerable.

Businesses must do more to support those struggling to make ends meet. For example, broadband companies should promote discounted tariffs to those who are eligible and energy companies must be ready to help customers when the new price cap is announced and takes effect, including offering payment plans for those who need them.

Ofgem must also move quickly on its pledge to take tough action against energy suppliers that are charging people too much for direct debits – and send a clear message that this behaviour from businesses is totally unacceptable.

“Our research shows that a relentless cost of living crisis is continuing to put huge pressure on household finances – with consumer confidence in the economy plummeting to its lowest point since the pandemic.

“These pressures are especially apparent among the most financially vulnerable – with around two-thirds of those on incomes of £21,000 or lower saying they’ve had to make at least one financial adjustment to cover essentials in the last month.

“The government and businesses must ensure that targeted support reaches the ever-growing number of consumers struggling to make ends meet.”

The survey indicates that between 6.2 per cent and 8.5 per cent of households missed or defaulted on at least one mortgage, rent, loan, credit card or bill repayment in the last month, with an average estimate of 7.3 per cent.

Figure 1: Nearly six in ten households made at least one adjustment to cover essential spending in the last month 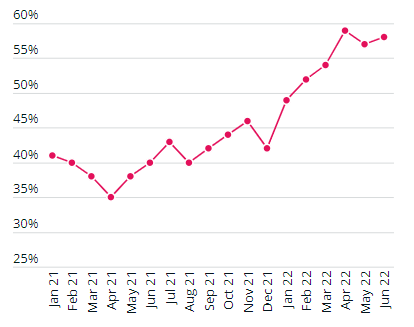 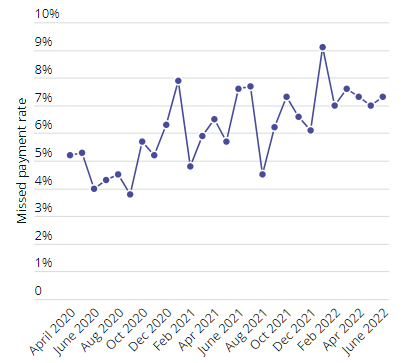 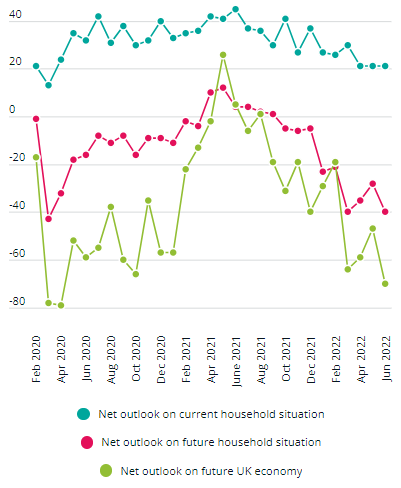