Amazon is failing to get to grips with a flood of shoddy products boosted by suspicious and fake reviews on its marketplace that risk misleading millions of customers, Which? has found.

The consumer champion sourced a selection of products that typify the thousands of devices made and sold by relatively unknown Chinese brands, which have become increasingly prevalent in online marketplace listings in recent years.

All of them had exceptionally high ratings on Amazon, and in some cases even the coveted ‘Amazon’s Choice’ endorsement – but they also raised concerns that sellers were seeking to game the system with fake reviews and other suspicious activity.

When Which? put eight of these products through its independent lab tests, three performed so badly they were rated as ‘Don’t Buys’ – low scoring products Which? advises consumers to avoid at all costs.  Almost all of the products – headphones, vacuum cleaners, dash cams and Bluetooth speakers – fell well short of the average Which? score for product performance in their respective categories.

A set of headphones made by little-known brand Yineme exhibited signs of suspicious review activity – including unusually high numbers of positive reviews, high review frequency, repetition of phrases and photos and videos often uploaded alongside reviews. The headphones had a high overall rating of 4.4 out of 5 from more than 800 reviews and an ‘Amazon’s Choice’ badge.

But Which? tests earned the product a Don’t Buy warning, with a paltry score of just 37 per cent. The tests revealed the sound to be ‘exceptionally poor,’ with noise cancelling rendered worthless by the poor sound quality. Which?’s tests include simulating the sound of an underground train journey, to identify if headphones will work well on commuter journeys, and this product was disappointing in this regard.

Shortly after Which? reported these headphones to Amazon, the product was made ‘currently unavailable’. Amazon has also deleted customer reviews from this product en masse.

The Onson Cordless Vacuum showed signs of suspicious reviews, scoring an average of 4.4 on Amazon and again had the coveted ‘Amazon’s Choice’ recommendation. Which? has seen evidence of sellers that incentivise fake positive reviews often asking for a product photo or video upload in order to collect their reward. On this product, 40 per cent of reviews were accompanied by a picture or video, and all of these were five star reviews.

But in tests it turned out to be one of Which?’s lowest scoring cordless vacuums ever – a Don’t Buy scoring just 32 per cent.

Which?’s experts found it difficult to use and unhygienic to empty, and it scored just one star for cleaning on carpets, floorboards and laminate flooring. It was also poor at removing pet hair.

Another red flag on Amazon Marketplace listings are review surges, or high numbers of reviews being left in a short space of time. A pair of Enacfire Future Plus Headphones – again a relatively unknown brand – had a near perfect average score of 4.9 out of five from a large number of reviews, the vast majority of which were five-star. Reviews have almost tripled in three months. It has now amassed more than 1,000 customer reviews on Amazon – and more than five times as many five-star reviews per day on average than Apple’s market-leading Airpods.

When Which? tested the performance of the headphones, they scored an abysmal 39 per cent and a Don’t Buy warning.  The sound quality was ‘unforgivably poor’ with an ‘incredibly tinny sound’, ‘appalling comfort’ and a substandard battery life for one listening session.

The consumer champion is concerned that Amazon is failing to take strong action to stop these fake reviews, which are continuing to dupe millions of its customers. This is a vital issue, with online reviews influencing an estimated £23 billion of transactions a year in the UK alone, according to the Competition and Markets Authority (CMA).

Which? believes online retail firms must be more responsible for the information presented to consumers on their platforms. These findings provide yet further evidence that the CMA should ensure the scope of its ongoing investigation into fake and misleading reviews includes online sites that allow user reviews, so that online customer reviews are less of a minefield for consumers using genuine customer feedback to decide what products to buy.

“Customer reviews should be a helpful resource for shoppers choosing what to buy and billions of pounds are spent every year based on this feedback, so it’s vital that Amazon takes stronger action to ensure people can trust the information they see online and aren’t duped into buying poor quality products.

“There appears to be no sense of urgency from the industry to tackle this problem so it’s down to the regulator to make that happen. We urge the regulator to investigate how fake reviews are used to manipulate consumers, and to crack down on sites that fail to take appropriate action to combat this. “

How Which? tests headphones: https://www.which.co.uk/reviews/headphones/article/how-we-test-headphones

How Which? tests dash cams: https://www.which.co.uk/reviews/dash-cams/article/how-we-test-dash-cams

Which? reviews are different from the rest – all the products we review and recommend are put through rigorous independent lab tests. Which? tests harder so you can buy smarter. Find out more by visiting: which.co.uk.

Which? advice for spotting fake reviews:

For more tips for avoiding suspicious reviews, see the Which? guide on how to spot fake reviews – https://www.which.co.uk/consumer-rights/advice/how-to-spot-a-fake-review 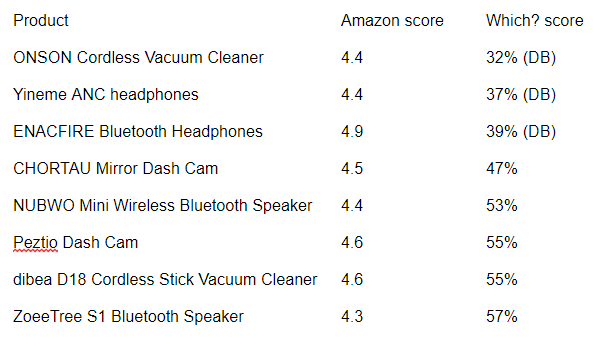 Video available for use: https://youtu.be/ZcXXYSyTVvY

Amazon Right of Reply and activity

Since Which? shared its findings with Amazon, two products – Yineme headphones and the Onson vacuum cleaner – appear to have been removed from sale completely, showing as ‘currently unavailable’.

On the Yineme headphones, between 10 and 26 September the number of reviews dropped from 1,160 to just 45, suggesting Amazon took action. Based on 45 reviews, the average customer rating for this product also dropped to 3.5 out of 5. Since Which? flagged the suspicious reviews to Amazon it was made ‘currently unavailable’.

Similarly when Which? reported the Onson vacuum cleaner to Amazon on suspicion of fake reviews, the product was made ‘currently unavailable’.

In addition, Amazon removed the dibea D18 cordless stick vacuum cleaner listing from its site completely, before Which? alerted it to its investigation.

“Amazon is relentless in our efforts to protect the integrity of reviews. Any attempt to manipulate customer reviews is strictly prohibited and in the last year alone, we’ve spent over $400 million to protect customers from reviews abuse, fraud, and other forms of misconduct.

“Our objective is to catch and remove abusive reviews before a customer ever sees it and in the last month, over 99% of the reviews read by customers were authentic. To do this, we use a combination of automated technology and teams of trained human investigators who analyze multiple data points such as reviewer, seller, and/or product history to determine authenticity. We use machine learning to analyze all incoming and existing reviews, and block or remove all detected inauthentic reviews. Our teams of investigators also remove abusive reviews and suspend and ban bad actors from the website. We feed the information about the actions taken by the human investigators to our machine learning technology so it continues to improve and becomes more effective in catching abuse. Last year, we prevented more than 13 million attempts to leave an inauthentic review and we took action against more than five million bad actor accounts attempting to manipulate reviews.

“We have clear participation guidelines for both reviewers and selling partners, and we suspend, ban, and take legal action on those who violate our policies. We work with social media sites to stop bad actors from colluding and pursue legal actions to permanently stop offenders. Customers can also help by reporting any requests they get to manipulate reviews to Customer Service.

“We work hard to enrich the shopping experience for our customers and selling partners with authentic reviews written by real customers, and we will continue to innovate to ensure customers can trust that every review on Amazon is authentic.”