Fashion challenger Vinted has beaten more established second-hand marketplace rivals, including Amazon, eBay and Facebook, in being rated most highly by buyers and sellers, new Which? research has revealed.

A fifth (18%) of these buyers and more than a fifth (23%) of these sellers had set up their accounts in the past year, as the cost of living crisis has put pressure on household budgets and people look to shop in a more sustainable way. Recent Which? research found that six in 10 (59%) consumers said they had to make an adjustment of some sort – including selling items – to cover essential spending in the last month.

Which? would, however, caution those looking to use second-hand marketplaces that they may come with some drawbacks. When buying from private sellers, shoppers should be wary that their consumer rights are weaker and, while there are bargains to be had, refunds can also be harder to come by.

Vinted, which is specifically a marketplace for fashion and home decor, was commended by sellers and buyers alike and had an overall customer score of 75 per cent. It also rated highly in most of the specific categories looked at – including a perfect five stars for search functionality and the ease of contacting sellers, making an offer and listing items for sale.

One Vinted user described a ‘lovely community of people’ and another said: ‘Vinted is great, the only thing is the hours of scrolling trying to find the perfect thing because you are spoilt for choices.’

More established platforms selling a wider range of products, Facebook Marketplace and Gumtree, came joint second – with customer scores of 68 per cent respectively. Facebook Marketplace was given five stars for ease of listing but just two stars for paying for items, while Gumtree received either three or four stars in every category.

They were closely followed by one of the biggest players eBay and community enterprise The Freecycle Network on 67 per cent.

Tech giant Amazon Marketplace got a customer score of 64 per cent. On the criteria for this score – satisfaction using the marketplace and the likelihood of recommending it – it fell down compared to other rivals and the average customer score across all platforms, which was 66 per cent. Although its ratings for search functionality and ease of making an offer or purchase were both five stars.

Depop, which like Vinted specialises in fashion and home decor, has become a popular choice for younger people, who make up 90 per cent of its global user base. However it received a customer score of 61 per cent. One person claimed: ‘Many sellers do not seem to check their accounts regularly and do not respond to queries or offers.’

Classifieds veteran Preloved had the lowest customer score at 56 per cent. It scored just two stars for contacting the seller and two stars for paying for the items. One buyer claimed: ‘their website is pretty basic.’

More widely, Which? found that buyers and sellers were largely happy with their experiences and would recommend the platform they used to others – that goes for eight in 10 (81%) of buyers and around eight in 10 (78%) of sellers too.

However one in 10 (10%) buyers Which? surveyed had raised a complaint with their chosen platform in the past two years. The most common issues were around goods being counterfeit or not as described, and difficulties contacting customer services when there was an issue.

Which? recommends that shoppers look at what buyer protections the different marketplaces offer from faulty products and scammers. Some act more like old-fashioned classified ads, connecting users but washing their hands of any further responsibility. If you cannot get a resolution with the seller or marketplace, the way you pay, such as by debit card, credit card or PayPal, could offer back up protection.

For sellers, time-wasting by potential buyers and the high selling fees that some platforms charge were the main issues raised in the previous two years. Just over one in 10 (12%)  of sellers had contacted customer services with an issue.

“People are eager to find new ways to save money amid the cost of living crisis and shop in a more sustainable way, so it is perhaps unsurprising to see shoppers flocking to second-hand marketplaces in their droves.

“Our research shows some lesser-known platforms have been rated highly by consumers and could be a good option for buying and selling second-hand items. However, it is worth looking at the buyer protections offered by different marketplaces before parting with your hard-earned cash.”

Tips for buying and selling online

If there’s no buyer protection offered, try to view items before buying. But, consider personal safety – don’t go to someone’s house alone to buy or sell. In some cases, it might be better to meet outdoors or in a public place.

Find out the true value of an item – if it’s too cheap, be wary. See if it’s been subject to recalls. Note that online marketplaces also do not have the same responsibilities for product safety as traditional retailers. If the listing uses stock images you may find them elsewhere on the internet. Look at buyer/ seller profiles: how long have they had an account? What are their ratings and reviews like?

Don’t use online transfer or agree to payments outside the marketplace if online payment through it is possible. Only communicate through the platform (don’t text, etc). Consider the returns and dispute policy – most don’t offer returns except in specific circumstances. 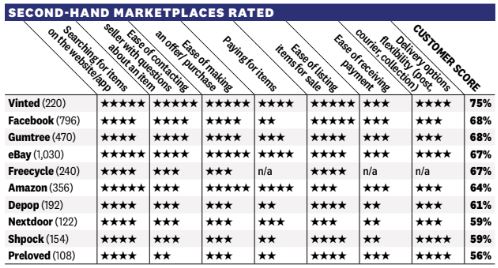 Using the table
Survey data collected in January 2022. Customer scores combined for buying and selling. Sample sizes in brackets. For each brand this is an equal split between people who had bought and sold using a marketplace. Customer score is based on satisfaction using the marketplace and likelihood of recommending it. Customers rated other aspects of service, presented above as star ratings. 4,000 people were asked about buying and 4,000 about selling.