A Which? snapshot investigation found ordering takeaways via food delivery apps was up to 44 per cent more expensive than going directly to the restaurant, while new research from the consumer champion also reveals that app users are sometimes struggling to get a satisfactory solution when something goes wrong with their order.

Which? researchers looked at the costs of ordering meals for between two to four people from five restaurants and cafes, both directly and on food delivery sites Deliveroo, UberEats and Just Eat. Across the five restaurants, ordering via a takeaway app proved 23 per cent (£7.14) more expensive on average than ordering directly from the restaurant.

Orders on Deliveroo were the most expensive overall, costing an average of 31 per cent (£9.91) more per order than ordering directly from the restaurant. UberEats orders cost an extra 25 per cent (£7.93), while JustEat orders were only 7 per cent (£1.56) more expensive.

JustEat did not deliver for one of the restaurants Which? looked at and on another, it applied a £7.30 discount. JustEat said it offers a price promise to help ensure customers do not pay more for food they order through its app compared to ordering via the restaurant’s online delivery service.

The most expensive order was a £43.94 Deliveroo takeaway from a burrito and taco restaurant, which cost 44 per cent (£12.29) more than ordering directly from the restaurant. Even before adding delivery and service charges, the cost of the food was 26 per cent (£8.30) more.

Prices on apps are generally set by restaurants. However, restaurants often increase the price of items when bought through the apps to cover the service fees that the apps charge them. Ordering directly from the restaurant also does not incur the delivery charges that ordering from a delivery app does.

Costs vary between apps, with each one charging different service and delivery fees.

For restaurants forced to close during national or regional lockdowns, the apps offered a lifeline to keep their businesses open. However, a number of the restaurants investigated told Which? they have had to raise their prices in the apps to account for the commissions of between 15-35 per cent they have to pay the delivery services.

The apps say their commissions are essential for running the service – for example, insurance, paying delivery riders, customer services and services offered to restaurants.

During the pandemic, people’s use of food delivery apps increased as consumers looked online for their weekly takeaway and grocery shop. But if customers are feeding a family, these higher prices can quickly pile up. Consumers may not be aware that they are paying these higher prices if they have not visited the restaurant themselves.

In Which?’s recent survey of more than 2,000 UK adults, more than half of people (56%) told the consumer champion they had used delivery apps for takeaways or groceries.

Around six in 10 people told Which? they used takeaway apps at least monthly pre-pandemic, compared with seven in 10 now. JustEat was the most widely used app, with two in five adults (39%) choosing it compared with a quarter (26%) for UberEats and one in five (20%) for Deliveroo.

This new research from the consumer champion also found that customers frequently have problems with orders and often find there is no way to effectively complain or put things right when this happens.

The most common issues with deliveries were late arrival, cold food and missing items. Others reported ruined items, as well as orders not turning up.

Six in 10 (59%) Deliveroo users surveyed told Which? they had a problem in the last 12  months, while more than half (53%) UberEats and JustEat (53%) customers reported having an issue with an order.

The most common resolution for UberEats customers was being offered a cash refund, but Deliveroo and JustEat users were more often offered credit or a voucher in the app. Some of these credits and vouchers come with expiry dates, and if consumers are not regular users, they could lose their money. JustEat said customers are asked to apply the credit to their account within 30 days, after which they are able to use it indefinitely.

Of those who had a problem, more than half of Deliveroo customers (53%) and two in five JustEat (46%) and UberEats (42%) customers found it difficult to complain the last time something went wrong, according to Which?’s survey. Only around half of those who did complain were happy with how it was resolved.

Which? believes food delivery apps should make the responsibilities of the restaurant and app clearer so customers are not at risk of losing out if things go wrong. The consumer champion heard from many people across all of the food delivery apps who found it hard to speak to someone about their order and were passed between the delivery driver, the app and the restaurant.

If a customer is due a refund, consumer law is clear that they should get it in the same way they paid out originally, unless they agree otherwise. Customers do not have to accept credit or a voucher in the app if they paid with their own credit or debit card.

“Next time you fancy a takeaway, you should be aware that the undoubted convenience offered by a delivery app comes with a hidden additional cost. If something goes wrong with your order, you might also find yourself caught between the restaurant and the app.

“Food delivery apps should do more to make the responsibilities of the restaurant and themselves clear so consumers are not caught between the two if there’s a problem with their order.

“If customers are owed a refund for a delivery which has gone wrong, they should remember they may be entitled to a cash refund under consumer law – they don’t have to accept credit or a voucher if it isn’t what they want.”

Which? surveyed 2,009 UK adults between 9th and 13th April 2021. Fieldwork was carried out online by Opinium and data have been weighted to be representative of the UK population (aged 18+). 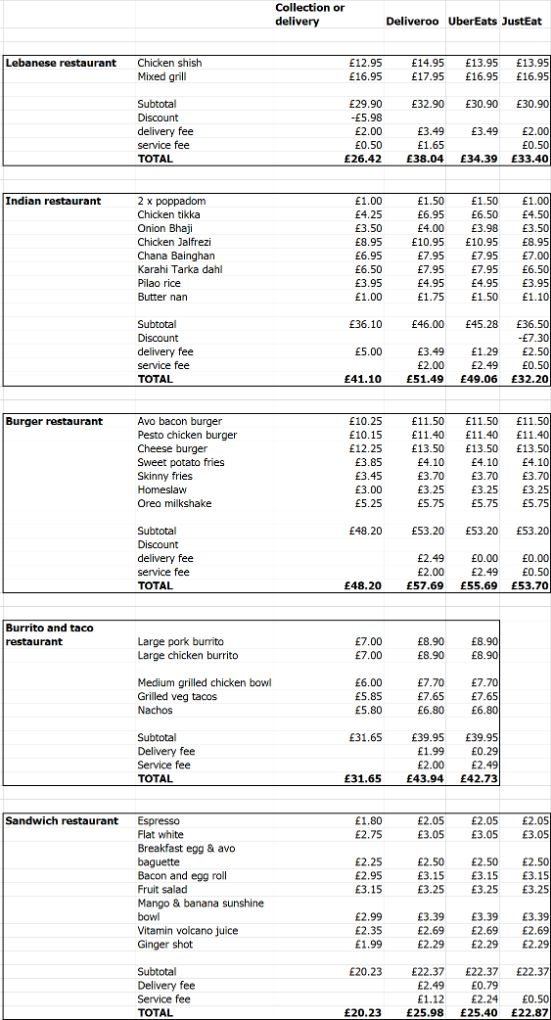 A Deliveroo spokesperson said: “Deliveroo always aims to offer our customers great value while also delivering sustainable growth for our restaurant partners. We encourage restaurants to set the same menu prices as they offer customers when dining in, and the commission we charge is then reinvested back into our business, paying for riders’ fees, customer services and upgrading our services for restaurants. We have a positive track record of helping our small restaurant partners throughout the pandemic and this will continue to be our priority as restaurants look towards a full reopening.”

A JustEat spokesperson said: “Just Eat is only successful if our restaurant partners are successful.  We believe our commission rates are aligned with the value we provide to our partners and we have a track record of helping restaurants prosper. It’s really important to us that our customers have a positive experience when using Just Eat. Whenever we’re made aware of any customer experience that falls short of the high standards we hope to deliver, we will always investigate and take appropriate action to ensure we find a suitable solution.”

An Uber Eats spokeswoman said: “At Uber Eats, we are completely focused on ensuring that the best restaurants and the best selection of food is available to customers, delivered in an average time of less than 30 minutes. We have a dedicated customer service team to help customers who have issues with their orders, and we would encourage anyone who does have an issue to reach out in the Help section of the app.”