During lockdown, the price of fuel hit a four-year low but new analysis from Which? has found that drivers were being overcharged at the pumps as sellers failed to pass on savings.

Rather than passing on the full reduction in wholesale prices, the consumer champion found that sellers were pumping up their own margins, which rose from 10p a litre to 18p – an increase of around 80 per cent – in the weeks after lockdown was introduced.

Despite a noticeable fall in the cost of unleaded petrol at forecourts across Britain, Which?’s study of fuel prices during lockdown suggests that drivers were actually still overpaying to fill up their cars as inflating margins allowed some fuel companies to pocket a proportion of the savings for themselves.

In March and April prices hovered between £1.02 and £1.04 a litre at supermarkets. In May, the price finally dropped below £1 at Morrisons, Asda and Tesco, while Sainsbury’s brought its prices down to the £1 mark. Independent petrol stations also followed suit but many remained several pence per litre more expensive.

Despite these noticeable savings, in the week that lockdown was announced in the UK, the average retail margin, which includes the cost of overheads and profit for suppliers and retailers, jumped from around 10p a litre to nearly 18p based on data supplied by the AA – by far the biggest jump of any week in 2019 and 2020.

The increase in margin may have been necessary for smaller independent petrol stations to survive the pandemic crisis, but some bigger independent petrol station groups – such as Motor Fuel Group, which has around 900 stations – are responsible for around 30 per cent of the market, and some will have made savings of millions of pounds during lockdown.

While this was partially due to financial measures introduced by the UK government, such as the business rate holidays, it raises questions about how high margins, such as those seen during the coronavirus pandemic, are set.

Currently, there are no established rules on the margins retailers can apply to pump prices, and, crucially, there’s not an independent fuel watchdog to monitor that these costs are fairly calculated.

Motorway services, which are privately owned, are able to charge large premiums for fuel compared with other forecourts. This also applies to the cost of items for sale in their service stations, meaning customers could be charged different prices for a cup of coffee if they stopped multiple times on a journey.

Which? found that sellers setting their own margins also have a role in regional differences and in the first week of lockdown, the difference in price between Northern Ireland and the South East of England was as much as 8p a litre for petrol and 6p a litre for diesel. Drivers in Northern Ireland get the best deal, because there is a proportionally high number of forecourts and therefore increased competition to keep prices low.

Which?’s own data also revealed that petrol is generally cheaper in towns and cities than in rural locations. But supermarket fuel forecourts, even in the countryside, are still cheaper than oil-company-owned petrol stations in cities.

Supermarkets sell 45 per cent of all fuel, benefiting from lower delivery costs due to the volumes they buy and sell, and bringing in footfall to their stores along with lower pump prices. In areas where there is less competition, particularly from large supermarket stores, drivers will get less value for money as independent fuel forecourts will be able to maintain higher margins with less impact on custom.

However, even supermarkets – which often reflect changes to the wholesale price more quickly than independent or oil-company-owned forecourts – sometimes choose to pass on any savings due to falling wholesale prices to customers through money-off vouchers instead of lowering prices.

In a survey, nearly half (45%) of respondents said that they use supermarket vouchers to reduce their fuel costs. However, the often high minimum spend requirements may mean that this is not a good value for money as it might seem, as those who can’t afford the minimum spend, or who don’t want to spend it, miss out on the savings on petrol.

The retail margin has already started to drop closer to pre-lockdown levels as demand returns to normal, but the pandemic has highlighted serious issues with the uncapped margins being set by fuel retailers, and the lack of an independent regulatory body to monitor these.

Which? believes drops in wholesale prices must be fairly reflected at the pumps and savings passed on to drivers, no matter where they buy their fuel.

Harry Rose, Editor of Which? said:

“While there may have been fair cause for some fuel sellers to increase retail margins in order to survive lockdown, there really is no excuse for some larger retailers to be keeping savings for themselves during the pandemic. For customers to be charged fairly at the pumps wholesale savings must be passed on.

“If you want to save money on fuel, buy an economical car and fill it up at a supermarket. Although if you have a local and convenient garage that you like using, do continue to give it your support.” 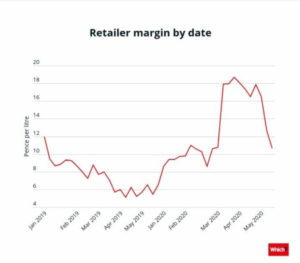 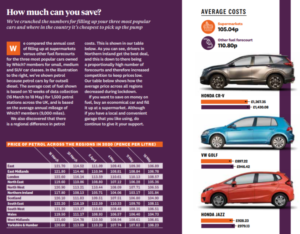