Older people are often deprived of going away by a range of surcharges on their holidays – including sky-high insurance and car hire rates as well as extra charges for booking by phone, a Which? investigation has found.

The consumer champion found that a typical 15-day travel insurance premium leaps from £30 for a 64-year-old to more than £60 for someone aged 70 – even if they have no health issues to declare.

When Which? looked at European annual policies it found travellers over 80 paid more than six times what those aged between 50 and 54 do (£355 compared with £54).

Even more alarming, a comparison of more than 100 annual travel insurance quotes for cover in Europe found that policies from specialist providers, Age Co and Saga, were more expensive for customers in their late 60s and 70s than other providers.

Once a keen holidaymaker, Sheila Stead told Which? Travel she can no longer afford to go on holiday after her travel insurance premium rocketed from £774 to £2,806 in just 18 months.

People over 65 are the age group most likely to take foreign holidays but despite age discrimination laws, different rules around financial products and holidays mean that older people pay through the nose for even bog-standard travel insurance as well as a host of other common holiday essentials.

Older customers who stay loyal to their insurers over a number of years may also pay more in premiums, with the fear of being unable to find better policies keeping them trapped.

Some travellers can find their holidays are ruined by car hire firms not allowing them to rent vehicles because they are too old.

While some will allow healthy older drivers to hire a car with no extra charge when Which? Travel looked at the cost of hiring a car in Alicante, Firefly wanted to charge €6.95 extra a day for anyone over 70. Drivalia charge €5 a day from 75, Recordgo 7€ a day from 70 (with a minimum of €14) and Dickmanns an astonishing €20 a day, with a minimum charge of €55 for anyone 75 or over.

However, statistically, 70-year-olds are nowhere near as likely to have an accident as a 20-year old.

More subtle forms of discrimination also exist for older people. Which? Travel found that for bookings made over the phone, Ryanair and Tui add a £20 surcharge, easyJet £15 and British Airways £10 – penalising those who don’t book online.

Which? believes that some companies in the travel industry are unjustly targeting older travellers, charging them disproportionate amounts of money and cashing in on people’s expectations that prices always rise with age.

“While many 70-year-olds might accept they would have to pay more for their travel insurance than someone who is 25, perfectly healthy older people are missing out on travelling in their golden years due to spiralling premiums.

“The travel industry must urgently address this problem and stop penalising older generations who are more active and more determined than ever before.

“If you’re struggling to find travel insurance or the quotes you are getting are too high, you can try using an insurance broker. They will offer advice and search the market to find the right policy for you at the most competitive price available.”

At the age of 81 and with some medical issues, she accepted that this is not unusual. And, when her brother suffered a heart attack two days before they were due to fly off together to Morocco, she was relieved to at least be able to claim the cost of her holiday

However, the next time she went to renew, her quote had gone up to £1,602. Then in September 2019, she looked again and she was quoted £2,806. Insure & Go had more than trebled her premium in just 18 months, with no change except that she was now a bit older.

Insure & Go told Which? that Shiela’s brother’s ill health or her previous claim made no difference. The issue was primarily her age.

The research also found that the average premium for an annual European policy hiked up by 65% (from £69 to £114) for healthy customers entering their late 60s. And while premiums continue to increase relentlessly once they pass into their 70s  – policy choice rapidly diminishes. Looking at policies’ maximum ages, a customer turning 70 could theoretically choose from 86% of the annual policies examined. By the time they’re 80, this has sunk to 30%. 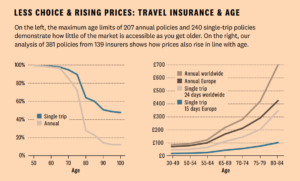 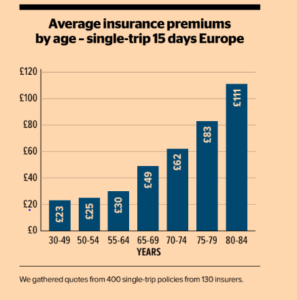