As part of a comparative investigation into the difference between supermarkets’ standard and premium products, Which? nutrition experts have reviewed the contents twelve different 190g jars of pesto from supermarkets Asda, Co-op, M&S, Morrisons, Sainsbury’s, Tesco and Waitrose.

The standard pestos Which? looked at were all made in Italy and contained between 42 and 49 per cent basil, but they also contained cheaper ingredients in place of the traditional elements, such as cashew nuts instead of pine nuts, or a mix of both. Olive oil was also substituted with sunflower oil, and parmesan with less expensive grana padano and pecorino romano cheeses.

The premium pestos we reviewed were all labelled ‘alla Genovese’ and by definition have to contain the traditional ingredients of basil, olive oil, pine nuts and parmesan. The five we examined all  contained between 38 and 50 per cent basil, plus the requisite extra-virgin olive oil and parmiggiano reggiano (parmesan) as well as pine nuts.

However, even the premium pestos contained some surprising added extras. The  Morrisons (£1.95), Sainsbury’s (£1.50) and Tesco (£2.00) premium alla Genovese pestos all contained vegetable or bamboo-fibres as thickeners and added sugar, and Morrisons Pesto alla Genovese also listed water as an ingredient.

Our investigation showed that price doesn’t necessarily mean that your pesto will be free of less-expensive and possibly unwanted ingredients.  Check the ingredients list – some premium pestos contained thickeners and sugar, and the most expensive standard jar pesto, M&S (£2.10), contained carrot fibres. The products with the most authentic and traditional ingredients were Asda Extra Special Genovese Basil Pesto (£1.39) and Waitrose 1 Pesto alla Genovese (£2.70).

Nikki Stopford, Director of Research at Which?, said:

“Pesto has become a staple food in the UK but our research shows that many shoppers may be getting more than they bargain for when it comes to the pesto they are buying – and not necessarily in a good way.

“Our advice is not to assume that all pesto contains the same traditional ingredients.  Check the ingredients list if authenticity is important to you, or if you are trying to avoid certain contents, such as added sugar.”

The full Which? investigation into a range of budget versus premium foods, including houmous, yoghurt, sausages and fish, can be found in the May edition of Which? Magazine and will be available online at which.co.uk on April 19th. 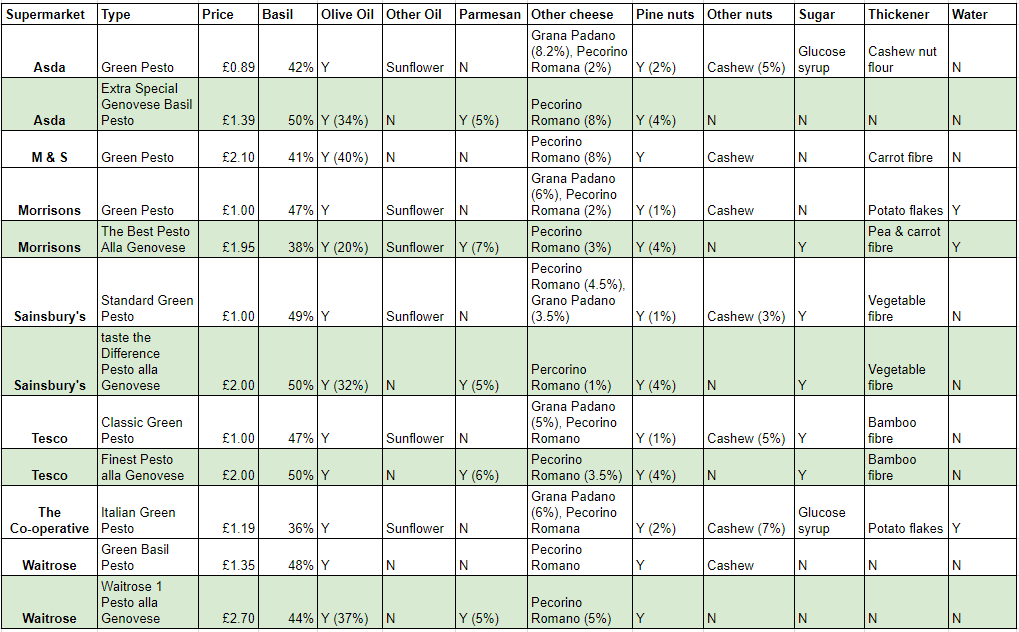