Insurance complaints have soared by more than 60 per cent in the last five years – with as many as one in three upheld in favour of the customer by the Financial Ombudsman Service, new analysis from Which? reveals.

The consumer champion looked at complaints data from the ombudsman and found that, between April 2018 and March 2019, 25,122 travel, home and car insurance policyholders escalated a complaint – a 61 per cent rise on five years ago, when there were 15,625 cases.

Around a third (31%) of these complaints were resolved in favour of the policyholder – meaning the insurer either reconsidered its decision or was obliged to pay out.

Which? found buildings insurance was the worst area for complaints, with a 42 per cent rise compared to last year and more than a third (35%) of complaints found in favour of the customer.

Around three in 10 (29%) complaints about car insurance providers were upheld in 2018. In this area, Great Lakes had the highest proportion (42%) of complaints upheld.

The rise in insurance complaints, particularly regarding building and travel insurers, suggests providers may not be handling claims fairly, forcing customers to turn to the ombudsman.

Just under three in 10 (28%) disputes that were resolved in favour of the policyholder were about exclusions – nuances within policy wording that resulted in a claim being denied.

In 2018, this issue was prevalent in nearly four in five (79%) upheld pet insurance complaints examined.

The ombudsman upheld a complaint against pet insurer Red Sands after it rejected a claim for a policyholder’s dog. The dog had eaten a lolly stick which had become lodged in its gut and threatened to cause internal damage. Following the dog’s prior treatment for diarrhoea, Red Sands had excluded all claims related to the digestive system, and so now wouldn’t pay.

Around one in eight (12%) complaints upheld by the ombudsman involved disputes about non-disclosure, where insurers declined a claim on the grounds that they had been misinformed about the policyholder’s circumstances.

In one case, the ombudsman upheld against car insurer Zenith, after it voided a customer’s policy because they accidentally entered the date their daughter obtained her provisional license instead of the date she passed her driving test.

One in 10 (11%) complaints that were upheld were about a pre-existing condition, an issue relevant for pet and travel insurance policies.

One Axa customer complained when their insurer declined a claim after they had surgery abroad for a disc hernia, but had failed to declare they’d received over-the-counter medications for back pain and self-refer for physiotherapy. The ombudsman ruled in their favour as “treatment” was not adequately defined in the policy wording.

While there are a number of other reasons why an insurer may decline a claim, it is worth going to the ombudsman, if the reason seems unfair or unclear, for a review of the case and to settle the dispute.

“Our analysis reveals a steep rise in insurance complaints referred to the ombudsman, and while it is encouraging that consumers feel empowered to challenge insurers, we have concerns that firms may not be handling claims fairly.

“When choosing an insurance firm it’s worth checking its record with the ombudsman to gauge how it treats customers – a firm with a high proportion of complaints upheld in favour of customers should be a red flag.” 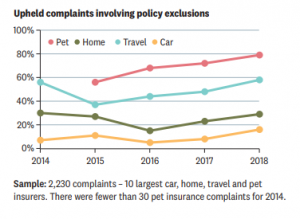 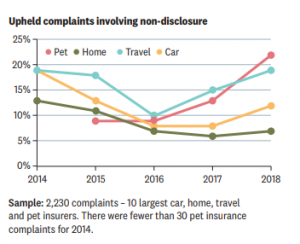 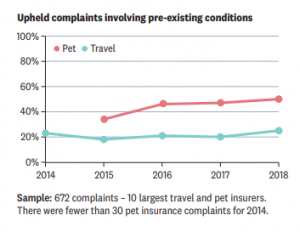