Millions of people are underestimating the cost of paying for a care home place – potentially putting some at risk of financial problems or struggling to get good quality care in later life, according to Which? research.

When the consumer champion asked people to estimate the cost of a private nursing home place in their region, more than half (55%) came up with a figure that fell short of the average cost.

On average, people underestimated the true cost of a care home place in England by £237 per week – the equivalent of £12,000 a year.

Three in 10 people admitted they simply did not know the weekly cost of a nursing home in their region, while only one in seven (15%) got the answer right or overestimated the cost.

Londoners had the most unrealistic expectations overall, underestimating the cost of a nursing home place by an average of £540 a week – the equivalent of £28,080 a year.

People in the East Midlands were closest to giving an accurate figure, underestimating the true cost at £721 a week – just £74 short of the real figure. But this was still the equivalent of a £3,848 a year shortfall.

There are more than 400,000 people in the UK living in residential and nursing care homes. Of these, almost half pay for care themselves and the rest are paid for, either wholly or partly, by their local authority or the NHS.

Around one in 10 older people with care needs now face care bills of more than £100,000 – and previous Which? research has shown that only one in 10 adults aged 55 or over say they’ve put aside money to pay for care needs as they get older.

Currently, self-funding residents are paying a premium of £1 billion a year to make up for a shortfall in council fees as care home fees generally continue to rise, according to care industry experts LaingBuisson – making preparation and research into the likely cost of care more important than ever.

Which? has launched a simple online cost of care and eligibility tool, to help families get information about the likely cost of care in their local authority area in England. It includes a unique calculator that enables people to find out how long their money might last for and advice on what happens if it runs out.

The calculator features on the consumer champion’s new Later Life Care website (formerly Which? Elderly Care), which is structured to support people through each stage of care.

It includes a care services directory with a range of new features, including food hygiene ratings for all care homes and Care Inspectorate inspection ratings for Scottish providers.

“Many people are seriously underestimating the costs of care in later life – meaning they could struggle to find high-quality care for themselves or a loved one, or even face financial difficulties.

“The care system can be confusing and daunting – and must often be navigated at a time of great stress for older people and their families. That’s why it’s vital that people have access to tools and resources to help them plan for the future.” 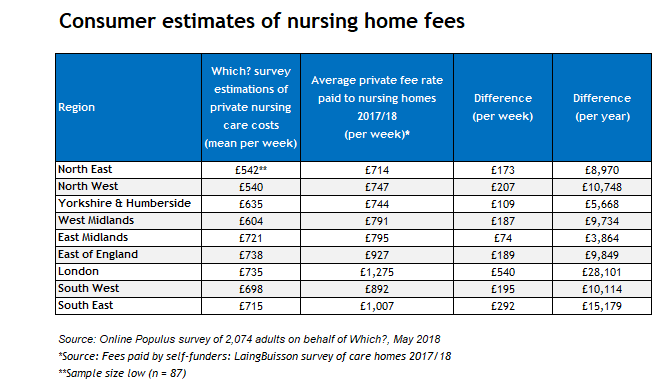