The Isles of Scilly in Cornwall and Assynt-Coigach in Scotland have come top in new Which? surveys rating the UK’s areas of outstanding natural beauty and national scenic areas.

With more people than ever before holidaying in the UK during the pandemic, Which? set out to uncover the top landscapes to visit.

The consumer champion surveyed almost 6,000 Which? members to find out their favourite areas of outstanding natural beauty and Scotland’s national scenic areas, with the Isles of Scilly and Assynt-Coigach coming out top.

The Isles of Scilly are famous for their white sandy beaches and were named the top area of outstanding natural beauty for the second year in a row, receiving four or five stars across every category apart from tourist attractions.

Unlike England, Northern Ireland and Wales, Scotland does not have area of outstanding natural beauty designations. Instead, it has 40 national scenic areas, so respondents rated these separately.

Assynt-Coigach in Scotland is known for its beautiful landscape, complete with cliffs, sea stacks and sandy beaches so it is unsurprising it came top of the consumer champion’s survey for national scenic areas.

It received an impressive five stars for scenery, peace and quiet and four stars for walks. One visitor described the area as “wild, spectacular and unique” in the UK.

The Causeway Coast was the highest scoring area of outstanding natural beauty in Northern Ireland – coming third in Which?’s survey. The extraordinary polygonal basalt columns of the Giant’s Causeway are the main attraction on this stretch of the North Antrim coast.

It received good scores across the board apart from for peace and quiet – as the Giant’s Causeway can get busy at peak times.

One visitor said: “A visit to the Giant’s Causeway alone is reason enough to visit. Combine this with the Causeway Coastal path and the other attractions of the area to ice the cake.”

Northern Ireland had an impressive total of four areas of outstanding natural beauty in the top ten – the Causeway Coast, Strangford Lough, Mourne and Antrim Coast and Glens.

The top scoring area of natural beauty in Wales was the Gower Peninsula. Its main attraction is the world-famous Rhossili Bay but the area also features other sandy bays, wildlife-rich saltmarsh and mudflats and ancient sites.

It received an impressive four stars for scenery, walks and wildlife spotting and a respectable three stars in all other categories. Respondents had particularly high praise for its beaches and beautiful scenery.

All of the destinations Which? surveyed received respectable scores – even at the lower end of the tables.

The Blackdown Hills on the Somerset-Devon border and Fleet Valley and Nith Estuary – both in South West Scotland – all received high overall scores and three stars in several categories.

“During the pandemic, many of us discovered the joys of a British holiday and our survey findings show that areas of outstanding natural beauty and national scenic areas have plenty to offer with stiff competition between the nation’s favourites.

“The best news from the survey is just how many highly-rated destinations we have to choose from, including many little known destinations that you’ll be able to enjoy without crowds.”

Which? surveyed 5,813 Which? Connect panel members in July 2021 who told us about 13,846 experiences in areas of outstanding natural beauty and 3,627 experiences in Scotland’s national scenic areas.

Please note that any publication of the below table also requires a link back to the full results on Which?: https://www.which.co.uk/reviews/uk-destinations/article/the-best-areas-of-outstanding-natural-beauty-in-the-uk-aIgUm4Y9i6tT 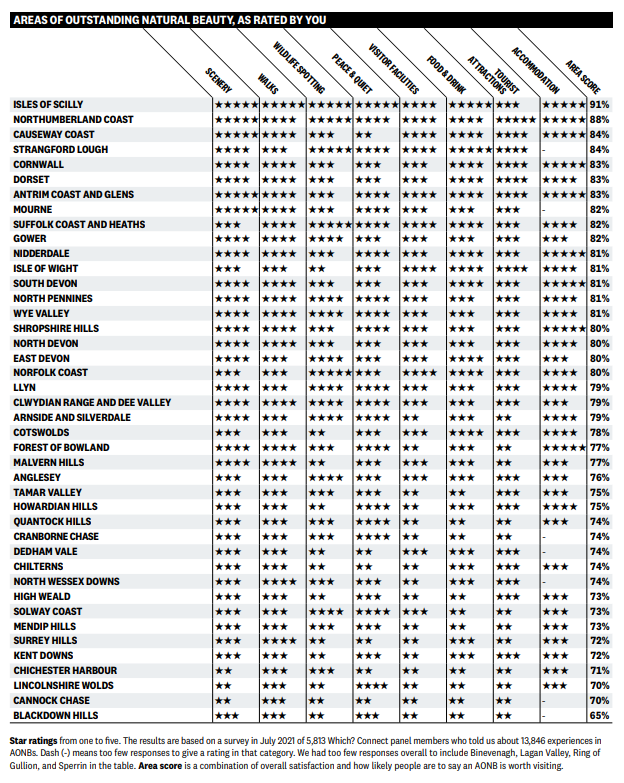 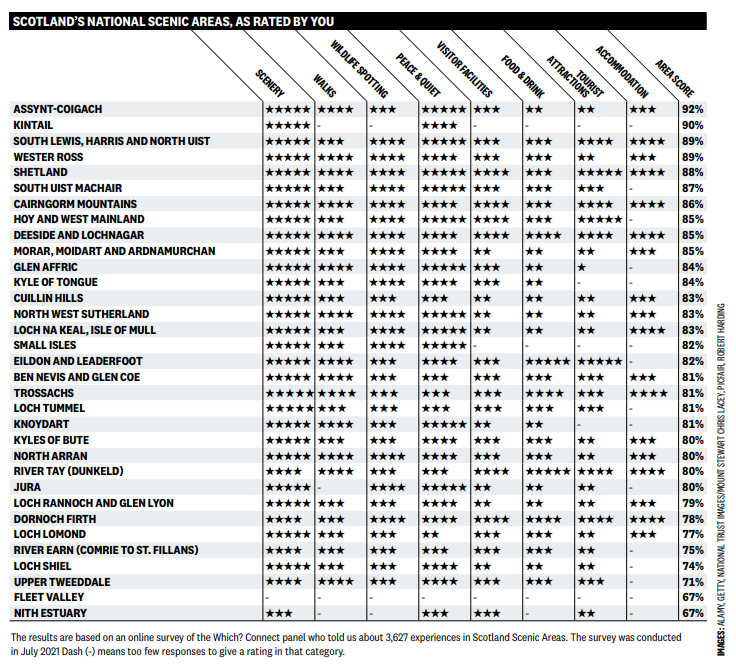