Waitrose scored a maximum five stars in almost every category – from ease of finding products and fast-moving queues, to friendly staff and the appearance of its shops – and was only let down by a two-star score for value.

Waitrose has now secured the top position in the Which? rankings two years in a row – holding onto the crown despite the increasing popularity of the likes of Aldi and Lidl.

In the Which? survey of more than 14,000 of its members, Asda was rated the worst, finishing at the bottom of the consumer champion’s rankings for in-store grocery shopping.

The consumer group found that shoppers like Asda’s range of goods in store, but clearly want more recyclable packaging and products without packaging, as the store received only one star for this aspect. The survey revealed that Asda provides neither the noteworthy store experience of Waitrose or Marks & Spencer nor the value of Aldi or Lidl. Asda scored just two stars for the quality of its own-label products.

Marks & Spencer lived up to its reputation for quality when it comes to food and drink, scoring five stars for both its own-brand and fresh produce. Its overall customer score of 73 per cent places it just below Waitrose, not managing to quite match its rival’s superb in-store experience or product range. Marks & Spencer wasn’t able to match Waitrose for ease of finding products, queues or staff availability.

Aldi and Lidl were rated best for value, both receiving five stars. The two supermarkets are seen as the best for those wanting more for their money, with rock-bottom prices making customers much more forgiving of their less-impressive traits, such as long queues, or unhelpful or hard-to-find staff.

One Aldi customer said: “It’s not a pleasant place to shop, but value for money is exceptional.”

Morrisons and Sainsbury’s came mid-table, with Tesco sliding in just below and Iceland coming in second-to-bottom. Shoppers told Which? that they like Iceland’s value for money, but this was not enough to boost its score overall. The supermarket failed to impress with its fresh produce or product range, and got just one star for availability of recyclable packaging.

The Which? study also found that when shopping in store, people were most frustrated by waiting for help at self-service checkouts (26%) and by a lack of staffed checkouts (25%).

“The quality of fresh products is the single most important factor for our members when choosing where to shop in store, and this is just one of the areas where shoppers have told us that Waitrose excels.

“There’s clear room for improvement for the ‘big four’ – Tesco, Sainsbury’s, Morrisons and Asda – as they continue to trail behind Waitrose and M&S for experience, and behind Aldi and Lidl on value.” 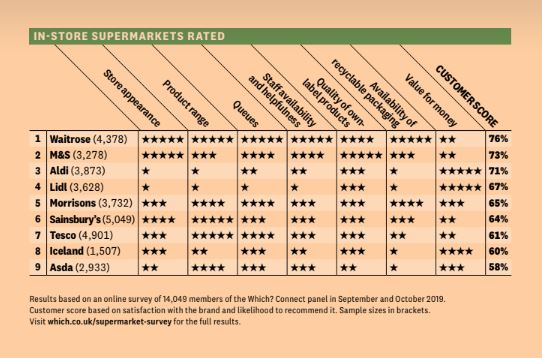