Disaster-prone Ryanair has finished bottom of the Which? Travel annual airline survey for the sixth consecutive year.

In the consumer champion’s annual short-haul airline survey, passengers gave the budget carrier the lowest possible rating for boarding, seat comfort, food and drink, and cabin environment – leaving it with a dismal overall customer score of 40 per cent.

Ryanair’s reputation has declined so much that thousands of respondents told the consumer champion that they would never again fly Ryanair, even if it was cheaper than its rivals.

Of those who said there was one airline with which they’d never travel, 70 per cent named Ryanair – no other airline came close.

Ryanair ruined the holiday plans of thousands of people in 2018 by cancelling flights and then refusing to pay its passengers compensation – resulting in the Civil Aviation Authority taking enforcement action.

The airline made £1.75bn last year from ‘extras’ – 28 per cent of its revenue. Assigned seating on the airline can cost up to £30 each for a return journey, priority boarding, which includes a wheely cabin case, costs an extra £12 and the cost of checking in extra luggage can also be significant.

The airline also repeatedly tinkered with its luggage rules, risking confusion among passengers with three separate changes over the course of the year. One passenger told Which?: ‘There are too many rules. I worry about getting caught with hidden costs,’.

In 2017, British Airways promised improvements after scoring just 52 per cent in Which?’s short-haul rankings and 50 per cent for its long-haul services.

Bringing back a second meal on long haul and a pledge of more M&S sandwiches to buy on short-haul went some way to arresting the decline, yet passengers still gave food and drink just two stars and the overall customer score was still a very underwhelming 56 per cent for short-haul and a slightly better 58 per cent for its long-haul flights.

EasyJet managed a better customer score than both Ryanair and BA, coming in the middle of the rankings with 63 per cent – getting customers from A to B without too much drama for not much money.

At the other end of the scale, Jet2 impressed passengers with its service, seats and boarding and earned a customer score of 75%.

“Airfares might seem to be getting cheaper, but only if you don’t fancy sitting with your family and children or taking even a small cabin bag on-board. Increasingly you need a calculator to work out what the final bill will be, especially with Ryanair.

“It has spent the last two years cancelling thousands of flights, ruining hundreds of thousands of holidays and flouting the rules on compensation as well. The results of our survey show passengers are fed up. They should switch to one of their rivals, who prove that budget prices don’t have to mean budget service.”

In September and October 2018, 7,901 Which? Members completed a survey about their recent experiences of flying with an airline from the UK. 12,459 member experiences were recorded, of which 10,474 were economy flights.
Airlines are rated for boarding, seat comfort, food and drink, cabin environment customers service and value for money. The lowest possible rating for each of these areas is a one star rating.

Thousands of Ryanair passengers saw their flights cancelled towards the end of 2018 as pilots and cabin crew staged a strike. Under EU law, if flights are cancelled at short notice it should bring the consolation of a decent payout – from €250-€400 for short-haul unless the cancellations were the result of “extraordinary circumstances”.
However, although the CAA told Ryanair that in its view the strikes, which were caused by Ryanair employees, were not an “extraordinary circumstance” and were therefore eligible for compensation, the airline refused to pay out. The airline now faces enforcement action. Full details here

In January, Ryanair introduced a policy which meant that passengers who wanted a guarantee that they could bring a wheelie suitcase or similar sized bag into the cabin had to pay £5 for priority boarding. Everybody else had their case checked into the hold. In May, this fee went up to £6 on most routes. In November, Ryanair changed the rules again. It banned wheelie suitcases and anything larger than a handbag from the cabin unless you purchased priority boarding. That cost £6, but was only available to the first 90 passengers – with everyone else forced to pay £8 for a larger wheelie cabin bag, which had then to be placed in the hold. Full details here 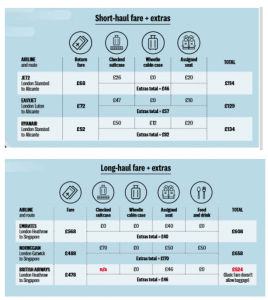 Ryanair denied it had experienced significant problems as a result of the 2018 strikes, arguing that 90% of schedules remained operational on strike days. It also said that ‘it delivers industry-leading customer service’ and claimed that its bag policy has been ‘simplified’ by recent changes.

It claimed that decreased punctuality in 2018 was largely due to Air Traffic Control strikes and added: ‘We’ve invested heavily in delivering on-time departures.’ It insists that passengers will continue to book with Ryanair as ‘having the lowest prices wins every time’.