Which? surveyed more than 5,000 consumers who experienced an issue with an online order when shopping with the biggest online retailers across tech, fashion, DIY and homewares during the pandemic, from March 2020 to March 2021.

The consumer champion asked which communication methods – from emails and chat bots to text messages and social media – were most effective when trying to get their issues resolved.

The only communication method with a worse score was sending a letter by post. Just under four in 10 (37%) consumers who had tried this method stated it was effective, while four in 10 (40%) said it was ineffective.

One DFS customer was less than impressed when the retailer ignored their complaint entirely, saying: “I contacted their social media and saw they were replying to others but ignored my request.”

Despite many online retailers investing in new and innovative communication methods in recent years, speaking with an online chat bot and contacting the retailer by text were also judged an inefficient way to resolve a complaint.

Just under half (46%) of participants who used online chat bots – which often pop up when consumers are browsing on retailers’ websites – said they were efficient, while a third (35%) said they were ineffective.

Text messaging scored similarly, with just under half (46%) of those surveyed who used text messaging saying it was effective in helping them get their complaint dealt with, and a third (33%) suggesting you might not want to bother.

A Currys customer described having to go round the houses to get their complaint resolved: “I found the chat bot a waste of time and when I got through to customer service they couldn’t do what I wanted over the phone.”

While texting did not score highly, some survey participants did have a good experience when using online retailers’ WhatsApp channels.

Retailers such as New Look, John Lewis and Boohoo now have WhatsApp numbers where you can message customer service advisors.

One New Look shopper was pleased with the swift response to their message: “I spoke to them through WhatsApp and they issued me a refund straight away and told me to keep the item I had received. They also gave me a code to get 5% off and free delivery on my next purchase.”

Despite these new communication methods, Which?’s survey suggests that speaking directly with an actual member of staff – either online or in person – is still the best way to get issues resolved.

Face-to-face communication proved to be one of the most efficient ways of rectifying an issue, with two-thirds (65%) of consumers who tried this stating it was effective. Only one in five (20%) said it was inefficient.

However, face-to-face contact with staff members has been difficult for many consumers during the pandemic as many stores were forced to shut their doors during the lockdowns.

Similarly, two-thirds (65%) of consumers who spoke to a real person via an online chat said this was effective, and a quarter (23%) said it was not.

Speaking over the phone scored similar results, with around six in ten (63%) consumers who called a customer service line saying it was efficient, and a quarter (24%) saying it was ineffective at getting their issue sorted.

One Amazon customer said: “All it took was one phone call about an item and it was resolved there and then.”

“With so many people having made the switch to shopping online during the pandemic, it’s important to know the most efficient way to get any issues resolved.

“Our survey shows just how important it is for retailers to allow customers to speak to someone directly.  Retailers who are falling short must improve their customer service offerings and where possible, offer customers the chance to speak to a member of staff if their issue cannot be resolved through other methods.

“Shoppers should always document any issues with an order and contact the retailer as soon as possible. If they aren’t responding or can’t fix the problem, you can try getting a refund using chargeback if you paid by debit card, or if the item cost more than £100 and you paid by credit card, you can try using Section 75 to get your money back.”

Which? surveyed 5,053 adults in the UK who had issues with an online retailer and contacted their customer service team between March 2020 and March 2021. Fieldwork was carried out online by Savanta between 14th and 26th May 2021. 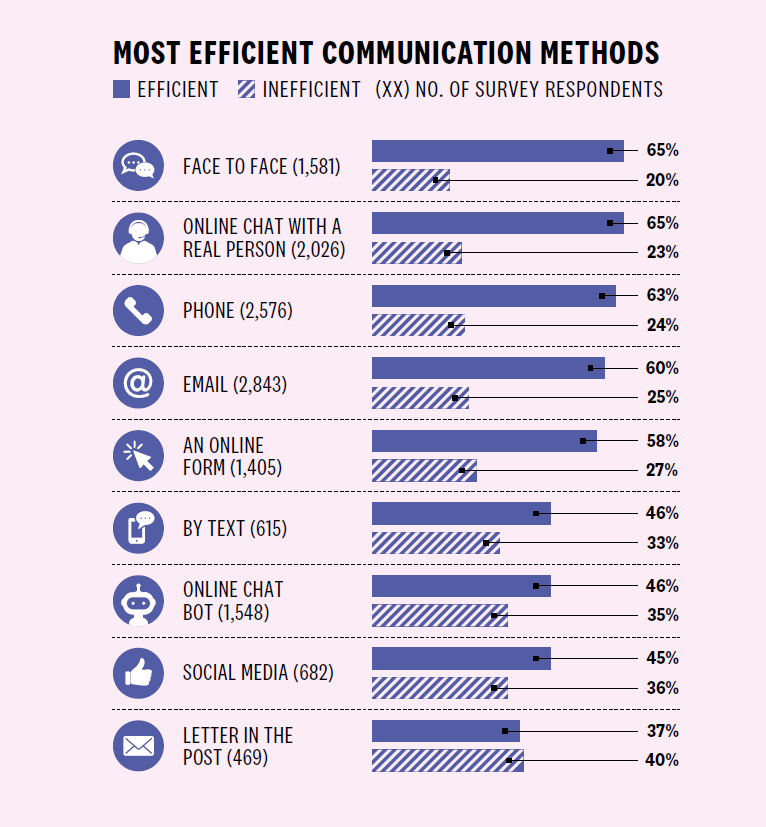 Mark ordered a television from Currys costing £499 on 11 August 2021. Before it was delivered, Mark contacted Currys to cancel the order and the television was returned to Currys.

Ever since then, Mark has been battling to get a refund for the returned television. He contacted Currys via the chatbot three times to try and find out when he will be refunded and said he received strange responses on the chat bot and felt no closer to getting his money back.

The second time he used the chatbot service, he tried to use the function that allows customers to download a transcript of their conversation so that he could have the conversation in writing – but was disappointed to find this function didn’t work.

“I popped in my email address but then checked my spam and inbox and there was nothing there,” Mark told us. “I resorted to doing screen grabs because the way things were proceeding it was like these conversations via chat bot had never happened.”

“Just an email saying you’re going to get your money back, bear with us would be nice. They’ve got £500 of my money and the TV and haven’t even sent me anything to say the refund is in hand or the process is moving on.”

Mark has since been told by Currys his refund is being processed.

A Currys PC World spokesperson said: “The latest Which? survey highlights that all online retailers, including ourselves, don’t always resolve issues perfectly online via bots. Around 25% of all our customer issues are resolved via bots or webchat.  They are great at managing simple customer requests but we recognise there is nothing better than speaking to a colleague, over the phone or face to face. During the challenging lockdown period, when this survey was carried out, we ensured that we offered as many face to face conversations as possible. We opened over 150 stores nationwide to offer customers Covid safe face to face support, returns or refunds and in March 2021 we introduced a new team in our Customer Management Centres whose role is to proactively reach out to our customers and since launch this team has improved our shopping experience for thousands of customers.

“Our customers always come first and we recognise that they truly value the face to face interaction, expertise and support of our instore colleagues. People beat automation and we are going to be super clear with our customer messages moving forward to encourage them, where possible and convenient, to come into stores to resolve their issues.

“We are very sorry that Mark experienced a delay in receiving his refund. On this occasion, human error meant that our usual webchat processes weren’t adhered to. We have recently undertaken a quality assurance review to ensure that processes are followed and issues identified and remedied quickly. Mark is now in possession of his refund and we have also offered a gesture of goodwill which our customer has accepted.”