Britons have rated the Louisiana city of New Orleans as the highest-scoring long-haul city in the world to visit, beating popular destinations such as Las Vegas, Dubai and Tokyo, according to a new Which? survey.

The consumer champion asked thousands of holidaymakers to rate recent trips to cities around the world across a range of categories including; quality of the cultural attractions, accommodation, shopping, food, value for money and, crucially, how crowded it was.

While Cape Town has been top for four of the last five years this year it was New Orleans which topped the list of almost 40 destinations with a city score of 90 per cent.

Those surveyed told Which? they loved ‘the Big Easy’ for its laid back nature, friendly locals, fusion cuisine and the ease of getting around.

Based on the Mississippi River, the city also got a five-star rating for the quality of its attractions – which includes live music and around the clock nightlife, as well as airboat rides in the bayou to spot alligators.

Singapore was the highest-rated destination in Asia with an 87 per cent city score. The island city-state was one of only three cities to receive five stars for shopping. It was also rated five stars for ease of getting around and its food and drink offering.

With its mix of Cantonese, Indian and Malay food at bargain food markets, iconic double helix bridge and endless malls, boutiques and high street chains, travellers are also spoilt for choice for places to visit and things to do. One holidaymaker said Singapore “has so many attractions, it is difficult to pick one out”.

Sydney was also second place in our survey, with its city score of 87 per cent beating rivals Melbourne and Perth.

Australia’s largest city is best known for its iconic Opera House, yacht-studded harbour and famous Bondi beach. Those surveyed told Which? it was easy to get around, earning it five stars in this category, with many also recommending the ferry to Manly and back for the best view of the city.

Coming in joint fifth, Tokyo (85%), Japan’s capital, mixes neon-lit skyscrapers and historic temples. It also proved hugely popular, and was the city which received the most five stars in a range of categories including shopping, attractions, ease of getting around and food and drink. One visitor described Tokyo as “an amazing city and spotlessly clean.”

Former winner, Cape Town, still managed an 84 per cent city score and received the coveted five-star rating for value for money – something only Shanghai, Jaipur and Hanoi could match.

Those who visited told Which? about stunning views at Table Mountain, plentiful vineyards and great bars and restaurants in the harbour.

At the bottom of the list, was ‘Sin City’ the City of Las Vegas only scraping together a 57 per cent city score. Those who visited the Nevada hot spot found it crowded with a lack of attractions, and described it at ‘brash’, ‘expensive’ and ‘over the top’. Its two stars for food and drink and value for money was also the joint lowest in the survey.

Also deemed to be disappointing, overrated and crowded was Los Angeles (58%). One respondent described the Californian City of Angels as “busy, dirty, smelly and dangerous”. It was one of only three cities to receive one star for ease of getting around.

Known for luxury shopping and ultramodern architecture, Dubai in the United Arab Emirates came in as fourth lowest with a mediocre 62 per cent city score.

“What the destinations at the top of our survey all have in common is visitors thought they were fantastic value for money – which may not mean cheap, New Orleans certainly isn’t, but that the food, the accommodation and the attractions were well worth the money spent on them.

“And poor value for money is what Las Vegas, Los Angeles and Dubai all share. It doesn’t matter if you have Universal Studios, Celine Dion shows or the world’s tallest building when visitors feel like they are being ripped off.” 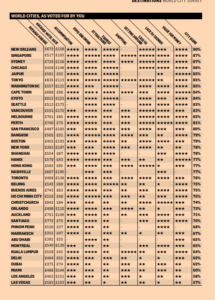 Where else to go in 2020 based on other Which? destination surveys