The big four supermarkets – Asda, Morrisons, Sainsbury’s and Tesco – have failed to impress in this year’s Which? supermarket survey, with the majority disappointing customers with the quality of their own-label produce in-store and struggling to keep up with rivals online.

In the Which? survey of more than 12,000 of its members, Asda was the worst performer of the big four, finishing at the bottom of the consumer champion’s rankings for both online and in-store shopping.

The supermarket received a customer score – a combination of customer satisfaction and likelihood to recommend – of just 56 per cent for in-store shopping and 65 per cent for online shopping.

Food quality seemed to be a big issue amongst Asda shoppers. The quality of both own-brand items and fresh products in-store was given only one and two-star ratings respectively by customers.

Asda’s online customers told us it is unusual for them to receive a delivery without a substitution. More than half (55%) had experienced this with their last order. Parsley replacing basil, potato gratin instead of macaroni cheese and red wine vinegar replaced by a bottle of red wine were among the more bizarre substitutions reported in the survey.

The UK’s biggest supermarket chain, Tesco, came just above Iceland and Asda for customer score for in-store, with a score of 59 per cent. It was given only a two-star rating for value for money and some survey respondents voiced concerns that the store was becoming more expensive.

Tesco performed better for online shopping with a score of 71 per cent. Shoppers praised its delivery drivers for being helpful and friendly – but suggested that the quality of produce could be improved.

Sainsbury’s has the edge over Tesco for its customer score for in-store shopping, with a score of 63 per cent, but came just below Tesco in the rankings for online shopping, receiving a score of 69 per cent. Sainsbury’s also failed to perform on value for money – customers gave it only two stars in this category for both in-store and online.

Morrisons came out on top among the big four, but below most of its smaller rivals, with a score of 64 per cent for in-store shopping and 70 per cent for online. It scored highly for queuing time in-store and for range of products but it was let down by  the quality of its own-label products,which were described as “tasteless” by one shopper, and received only a two-star rating.

Iceland performed badly when it came to in-store shopping, coming second from the bottom in the Which? survey, with a customer score of just 57 per cent. However, its ranking was reversed for online shopping: the store was only narrowly beaten on customer score by two percentage points to the top of the table by Ocado, receiving a score of 79 per cent.

While in-store customers rated Iceland poorly for quality of own-label produce, awarding it only two stars, it fared much better in this category with online shoppers who gave it four stars. This suggests that online shoppers may be stocking up on products they know and like, unlike customers looking for a weekly shop in-store. Some shopped at Iceland for specific items – including one shopper who went there for ostrich meat and another only for scallops.

German discounters Aldi and Lidl outperformed the big four with scores of 68 per cent and 66 per cent respectively, and both received five stars for value for money. However, they performed poorly when it came to store appearance, staff availability and range of products, receiving only one star in these categories.

“Our survey shows that while the big four are failing to consistently give customers the high-quality experience they deserve, both in-store and online, no supermarket is getting everything right.

“People today have more choice than ever on where to do their food shop and staying loyal to one supermarket has become a thing of the past. The big supermarkets really need to up their game if they’re going to keep their customers coming back.” 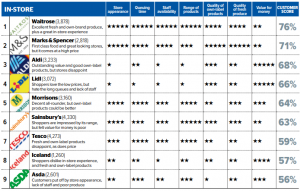 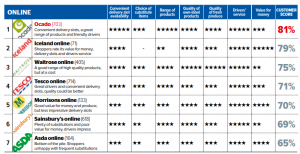