The UK’s biggest mobile providers have been outdone on customer service and value for money by their less well-known rivals, according to Which?’s annual mobile network survey.

O2, EE, Vodafone and Three were outperformed by virtual networks that include Smarty, Giffgaff, Tesco Mobile and Sky Mobile – even though these operators piggy-back on the same infrastructure as the so-called Big Four.

According to Ofcom, the four main operators serve three-quarters (76%) of customers in the UK – but Which?’s latest research suggests that, with the cost of living crisis at the forefront of consumers’ minds, it may be worth looking further afield for a good mobile deal.

Three scored the lowest out of the Big Four, coming in joint thirteenth place overall. It received the lowest rating for network reliability and customers were also unimpressed by its technical support and incentives offered. Nearly half of (45%) Three users experienced problems in the past year. Overall, three in ten (29%) of all mobile network customers experienced one or more problems.

At the other end of the scale, virtual networks Smarty and iD – which use Three’s infrastructure – were among the highest rated by customers in Which?’s table. Both earned a coveted five stars out of five for value for money compared to only three stars for Three.

EE, the largest UK network, did little better than Three, coming 11th out of the 16 network carriers included in the analysis. Customers gave the network a mediocre three stars across most categories including customer service, technical support and value for money. Only the network’s download speeds managed a four out of five star rating.

On the flipside, Plusnet – which also uses the EE network – found itself at the top of Which?’s table. It was among the six highly-rated virtual networks that earned full marks for value for money.

The highest scoring of the big four, O2, still only managed joint eighth place. Only a fifth (20%) of customers rated it excellent value for money.

Meanwhile, three of the highest scoring carriers in Which?’s survey, Giffgaff, Tesco and Sky all use O2’s infrastructure. All three virtual networks scored highly across the board, apart from GiffGaff which was let down on customer service and technical support as customers primarily rely on its community forum for help.

Not all virtual networks shone brightly in Which?’s survey. Asda struggled in second-last position, with a paltry customer service rating and newcomer Talk Mobile propped up the table. Both carriers only managed three stars for network reliability despite using the Vodafone network.

Which? also found the virtual networks offer much more competitive and flexible options, in fact, customers pay on average almost £10 a month less than Big Four customers across all contract types.

With the cost of living continuing to impact household budgets, the flexibility offered by virtual networks is an attractive way to keep mobile costs down. Focusing on rolling monthly sim deals over selling handsets with lengthy contracts gives challenger carriers an edge over their Big Four counterparts as people have a lot more control over how much they want to spend each month. Another benefit of rolling contracts is that consumers do not have to worry about the annual price rises which affect fixed term contracts as they are able to switch away.

On average, a Sim-only deal with O2, EE, Three or Vodafone will cost £5.20 a month more than with a virtual network, while renewing a contract with a new handset could cost up to a third more. A virtual network is more likely to offer a flexible, cheap contract for low data use, and they’re increasingly able to provide 5G plans.

Which? found customers of the Big Four are the most loyal – despite price hikes of up to 11 per cent. More than half of EE, O2 and Vodafone customers and 42 per cent of Three customers in our survey have been with their provider for five years or longer. It is quite likely that those who stay with the big firms for this long are paying more than they need to.

“The vast majority of mobile users are with one of the Big Four providers, but our research suggests consumers could save money during the cost of living crisis and get better service by switching to one of the networks challenging their dominance.

“Anyone looking for a reliable carrier that offers a flexible contract and good value for money should consider one of the virtual networks, who continue to outperform the Big Four year after year.” 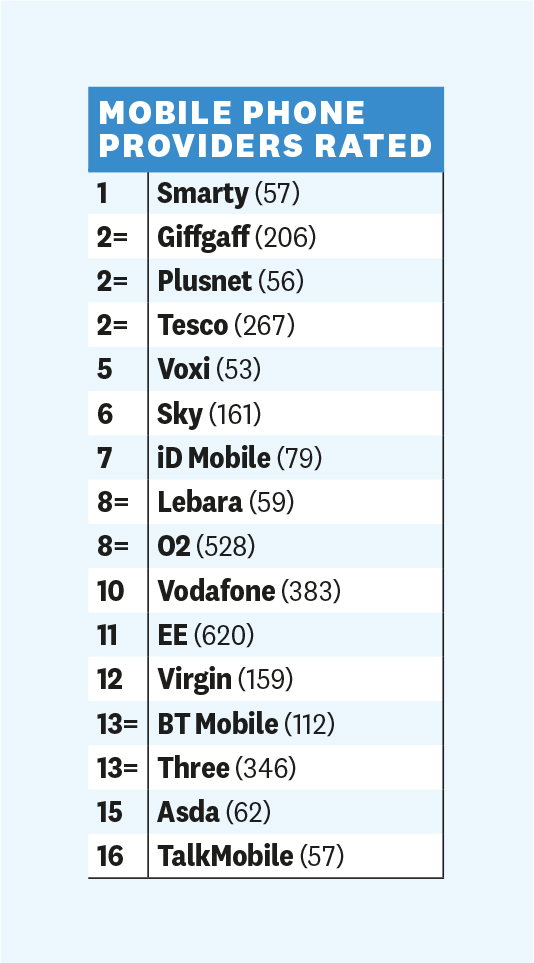