The three biggest mobile operators are failing to offer their customers a satisfactory level of service and support despite often costing more than smaller rivals, according to new Which? research.

Vodafone was rated the worst network in the country after mustering measly one-star ratings for customer service, value for money and technical support.

One in five (18%) Vodafone customers told the consumer champion that customer service, including complaints handling and the way their queries were dealt with, was poor.

One in eight (13%) customers rated the quality of technical support as poor, and one in five (19%) customers rated Vodafone as being poor for value for money. A quarter (24%) also knocked the incentives and rewards offered by the network.

EE, the UK’s largest mobile network, continues to rank among the worst providers in the country, according to its customers.

Only a quarter (27%) of EE customers told Which? they had received good or excellent service for technical support.

The provider also received distinctly average ratings when it came to ease of contact (42%) and customer service (43%).

O2 customers were also unhappy with the value for money they were getting, with one in 10 (10%) rating it as poor.

The incentives and rewards had underwhelming reports from customers with only a quarter (25%) rating O2’s offering as either good or excellent, compared to 51 per cent of virtual network partner Sky Mobile’s customers.

For the fourth year running, Three has taken the somewhat dubious honour of achieving the highest customer score among the Big Four networks – receiving average scores in most categories, including incentives offered and tech support.

Of the 13 networks included in the survey, it was mostly smaller ‘virtual networks’ that customers rated more highly.

And when Which? analysed the average monthly cost of both Sim only and certain contract deals, the Big Four were often more expensive.

The same could be said for the combined average monthly contract price for an iPhone XS, which was 18 per cent more (£10 dearer) with Vodafone, O2, EE and Three.

When Which? looked at the average monthly cost for a contract for a Samsung Galaxy S10 across the 13 networks, while the difference was less substantial at six per cent this still equated to a still a cost of over £3 more a month than a virtual network.

While these smaller providers pay the big networks to carry their signal, customers told Which? that not only do they mostly tend to be better value than their larger counterparts, they also tend to provide better customer support.

Giffgaff is an example of a network provider that seems to be giving its customers what they want.

Four in five (80%) Giffgaff customers pay less than £10 for their Sim-only contract – pointing to why value for money was rated so highly.

A large majority (95%) of customers said Giffgaff is good or excellent when it comes to value for money, making it the only provider to achieve a five-star rating in this category.

Almost all (97%) Giffgaff customers told Which? they would recommend the network to friends and family.

All mobile customers will soon be able to switch provider by text message, hopefully making it quicker and easier for customers to change their mobile provider.

From July, new rules from the regulator will mean that mobile providers will also be banned from charging for notice-periods running after the switch date.

This will stop people from paying for old and new services at the same time – something that is currently costing UK mobile customers around £10 million in total each year, according to Ofcom.

“The continuing reign of smaller networks over the big players goes to show exactly how important customer support and value for money are to mobile users.

“If you think you are paying too much or are not getting the level of service you expect from your provider you should shop around for a better deal – you might find you save yourself some money and probably a lot of grief too.” 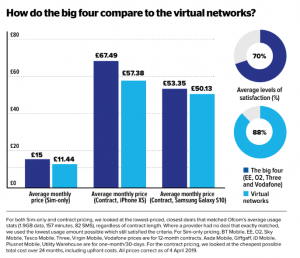