Parents hiring a child seat with their rental car this summer are being urged to take extra care as Which? research finds nearly nine in 10 families reported problems that could put a child’s life at risk – including seats that were provided damaged, the wrong size or without any instructions.

In a survey asking 1,800 parents with a child under 12 about car hire, the consumer champion found that 85 per cent of those who hired a car seat when renting a car had encountered issues with their it when they came to collect their car.

Seats that are not properly fitted could prove fatal in the event of a crash. Which? found that the most common problem, encountered by a third of parents (32%), was not being provided with any advice or instructions on how to fit the seat from the rental firm.

More than half (52%) of parents still used the car seat despite the lack of instructions.

Cost was seen as a massive issue by a quarter (27%) of the parents polled. Which? found that child car seats tend to cost between £7 to £12 a day – meaning a family with two small children could end up spending more than £300 hiring car seats for a fortnight.

Only three in 10 (31%), however, were put off sufficiently by the price to go without the car seat at all.

Many car hire companies give customers the option of selecting a car seat for a particular weight or height bracket. However, a quarter (23%) of the parents surveyed arrived at the rental desk to find that they had been given the wrong sized seat.

One in five (18%) parents said they had only been provided with a backless booster seat. While this type of seat is better than not using one at all, a child could still be seriously injured because it does not provide any protection in a side-on collision.

Half of parents (53%) chose not to use the hired child car seat if only a backless booster seat was supplied.

More than half (54%) of parents admitted they would still use the car seat even if it was damaged.

Overall, despite the range of problems families faced with their car seat when they arrived at the rental desk, more than half (53%) of parents used the car seat anyway.

However, two in five (37%) of the parents surveyed told Which? they had been provided with another seat and one in 10 (9%) decided that they would make do without a car seat altogether.

Parents planning on hiring a car seat with their rental car this summer should take care to request the correct car seat for their child at the time of booking – but Which?’s research shows that will not necessarily guarantee that an adequate seat is provided.

If given a seat that is damaged or unsuitable, parents should raise this with the rental firm straight away as they might be able to offer a better alternative.

If parents are concerned, Which? advises parents to bring their own car seat where possible. Most airline providers will let families put their car seat in the hold for free, while others can be folded so they are small enough to be hand luggage.

Another option if the car rental firm is unable to provide an adequate child seat is picking up a brand new one at a large supermarket near to the rental office. This may cost the same as hiring one but will be more likely to have the right choice of seat and will come with instructions and potentially expert advice.

“It’s alarming to hear that so many parents have experienced problems with child car seats when hiring a car. Issues such as a lack of instructions might not seem important, but could make all the difference in the event of an accident, as even the safest car seat won’t offer the best protection if fitted incorrectly.

“Car rental firms clearly need to do more to ensure they can provide the right car seats that are in good enough condition for parents to use. Until then, don’t be afraid to challenge the provider until they offer you an adequate alternative or where possible, try to take your own car seat with you.” 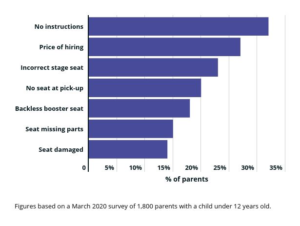