Britain’s fraud capitals for scams involving fake romances, computer virus attacks, investment fraud and bogus tradespeople are revealed by new Which? research – as overall levels of fraud continue to spiral out of control.

The consumer champion obtained exclusive police data from Action Fraud, the main reporting body for scams in the UK, and also looked at the Office for National Statistics (ONS) crime survey data to produce a detailed picture of the UK fraud threat.

The findings show that while overall levels of fraud have soared by more than 12 per cent in a year, according to the ONS data, it is a crime that is also massively under-reported.

While the crime survey shows there were more than 3.6 million cases of fraud in England and Wales in 2018, only 276,129 fraud and computer crime reports were made to Action Fraud in the 12 months to April 2019. That suggests fewer than 10 per cent of offences are being recorded by Action Fraud.

The data from Action Fraud shows how some categories of scam are more likely to be reported in certain parts of the country.

Warwickshire has the highest reported rate for advance fee fraud, in which victims are asked to pay for goods or services that are never delivered – for example the ‘foreign prince’ who needs a small loan to help unlock untold riches or a fraudster posing as an estate agent who needs a deposit for a non-existent property. The rate of reports there is 15.8 per 10,000 people, against the national average of 11.9.

Dating scams, which typically see people duped into transferring money linked to a fake romance, is most reported in Sussex. The rate of 1.9 reports per 10,000 people is higher than the national average of 1.1.

People in Norfolk were most likely to report computer fixing fraud, with a reporting rate of 10.3 per 10,000 people, compared with the national average of just 5.9.

Of the reports made to Action Fraud in the past two years, nearly half (239,206) fell into four categories. Online shopping and auctions fraud is the biggest reported type of fraud with 86,127 cases.

Londoners were most likely overall to be fraud victims, with 104 cases reported per 10,000 people, while those in Northern Ireland (38 cases per 10,000 people) appeared to be least affected.

Which?’s analysis also reveals how different types of fraud are more likely to affect older or younger consumers – with 49 the average age for victims filing a report with Action Fraud over the last two years.

Rental fraud – where prospective tenants are typically tricked into paying a deposit – was most likely to affect younger people, with 33 the average victim age.

The average age of victims of both ticket fraud and online shopping or auction fraud was 37.

Which? is concerned by the alarming increase in fraud rates and the slow progress being made in the fight against scams. The consumer champion previously revealed that fewer than one in 20 reported fraudulent cases were successfully closed within one year.

The consumer champion is warning against any further delay to introducing vital security measures that could protect millions of people against becoming victims in the first place – such as confirmation of payee name checks for bank transfers.

Which? is also calling on the government to set out a clear and ambitious agenda to tackle fraud, with greater transparency and accountability. It is unclear what progress was made by the government’s Joint Fraud Taskforce, and the Economic Crime Strategic Board established in January 2019, must now outline its priorities for preventing fraud.

“Fraud is spiralling out of control, so any measures that can help combat this worsening crime – such as the introduction of vital name check security for bank transfers – should be quickly introduced.

“The government must set out an ambitious agenda – with real accountability – to finally tackle the growing threat from scams, which are having a devastating impact on the lives of victims.” 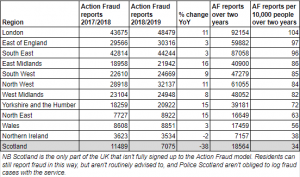 On the surface, Wales (56 reports per 10,000 people) seems to be off the fraudsters’ radar: there were fewer Action Fraud reports per person in Wales than in all the English regions for the majority of the most common fraud categories. However, the ONS’s Crime Survey for England and Wales estimates that fraud is more prevalent in Wales than in the North East and the North West. We believe this proves fraud is under-reported to a greater degree in Wales than elsewhere. 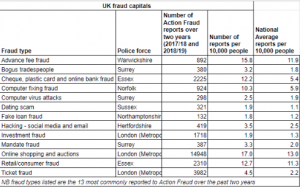 In January 2019 it was announced that The Home Secretary and Chancellor will jointly chair a government taskforce which will work to tackle economic crime.

The Joint Fraud Taskforce was set up by the Home Secretary in February 2016. The taskforce is a partnership between banks, law enforcement and government to deal with fraud and to focus on issues that have been considered too difficult for a single organisation to manage alone.